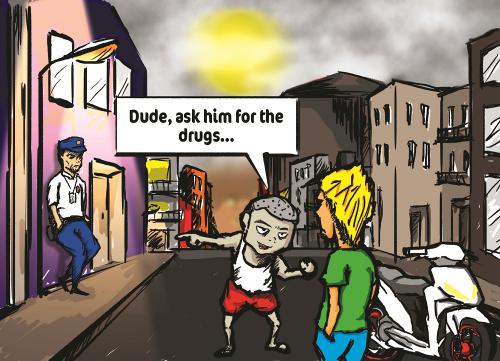 For many people in the local English-language media, the New Zealander was relied on as a valuable and trusted source of information on numerous high-profile cases in the Chalong Police precinct.

Mr Halpin was a prominent figure in the south of the island, often seen assisting Chalong Police in conducting raids on various businesses, including recent raids on dive shops. In February last year, it was none other than Mr Halpin who escorted Stein Dokset* out of his luxury villa in Kata after the Norwegian was placed under arrest for the murder of his ex-girlfriend, Rungnapa Suktong (story here).

News of Mr Halpin’s arrest sparked intense debate over a range of related issues on local blogsites. There is a clear desire by the community to have a deeper understanding of how Mr Halpin was arrested by Phuket Provincial Police, not Chalong Police, in a room with a digital scale and over 18 grams of the powerful stimulant.

If the allegations against Mr Halpin are proved true in court, it will likely serve as a blow by association to the reputation of Tourist Police Volunteers (TPV) on the island. Indeed, the reaction to his arrest shows that there already exists a great deal of resentment and distrust among expats toward those foreigners who would don a uniform to assist the Royal Thai Police. Allegations of these volunteers being self-serving, power hungry and even corrupt are not uncommon.

However, the vast majority of Tourist Police volunteers we have interviewed or otherwise interacted with over the years have appeared to be well-intended and selfless. Their considerable efforts in assisting foreign visitors in distress go largely unreported and are thus unappreciated by many in the local expatriate community.

Police are rightly emphasizing that Mr Halpin’s official role with the Tourist Police had ended well before his arrest. However, that will do little to influence the court of public opinion, which has as its perfect medium the blogosphere, that grand digital masquerade party where virtually all matter of speculation is served up by legions of anonymous contributors with no accountability for their assertions whatsoever.

One thing certain, however, is that none of this banter will likely have any real bearing on the fate of Mr Halpin, whose future prospects now fall squarely into the hands of the criminal justice system.

*The original story wrongly cited Dokset as having previously been a Tourist Police Volunteer. The error is regretted.