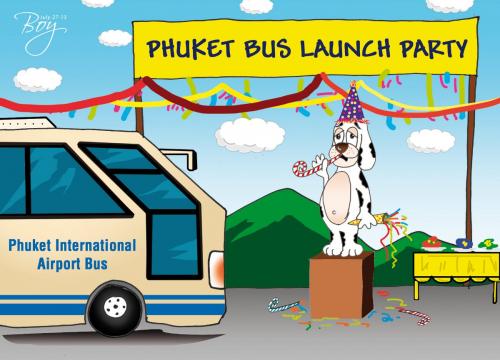 PHUKET: The quiet launch last week of a new bus to shuttle tourists from the airport to Patong (story here) comes as a small dose of good news for Phuket’s ailing public transport sector, which nevertheless continues to suffer from the chronic and very serious effects of collusion, self-entitlement and a blatant, goon-like disregard for the law, common decency and the greater good.

No other single issue has been the subject of more editorializing in this space, so we would like to formally applaud the operators of the new service, encourage all tourists to use it as much as possible, and ask for better support from the authorities in seeing that it is eventually “allowed” to extend its route all the way to Kata and Karon.

The failure of authorities to trumpet this significant launch – instead, they persuaded the operators to keep it as low-key as possible — does not bode well for the future of public transport on the island in general (story here), and especially not for Kata and Karon, where tuk-tuk and taxi operators continue to threaten “action” if their interests are infringed upon (story here).

As mentioned in this space several times in the past, the inability or unwillingness of authorities to stand up to self-serving public transport syndicates, like the well-entrenched monopoly in Kata-Karon, harms Phuket’s entire tourism industry and reinforces the island’s reputation as a “ripoff, banana republic” tourist destination.

Judging from the online comments in the English-language media, here and abroad, about the transport situation in Phuket, some readers might be led to believe that the situation is the result of some sort of greed-driven conspiracy directed against foreign tourists.

The reality is that Phuket’s reputation is also well-entrenched among residents throughout Thailand, thus costing the island untold billions of baht annually in lost revenue that could have come from domestic tourism – a too-often overlooked slice of the tourism pie.

Lack of reasonably-priced public transport of the kind that exists in every other province in the Kingdom also manifests itself in other ways, such as making Phuket the most expensive place to live and work in the country. This has resulted not only in a chronic labor shortage, but is also one of the major contributing factors to the island’s ever-worsening traffic woes.

That the transport syndicates controlling Patong have allowed the bus service to operate on their turf is an encouraging sign that even those with highly-vested interests can reason and be made willing to make some measured sacrifices for the greater good.

So far, no incidents of protest against the new service have been received from Patong or any of the other locales through which the long-awaited bus route passes. We hope that the police are making some kind of behind-the-scenes efforts to ensure that the fledgling service is allowed to establish itself and give Phuket what it needs more than anything else: safe, reasonably priced public transport.

Phuket Opinion: Our environment down the drain