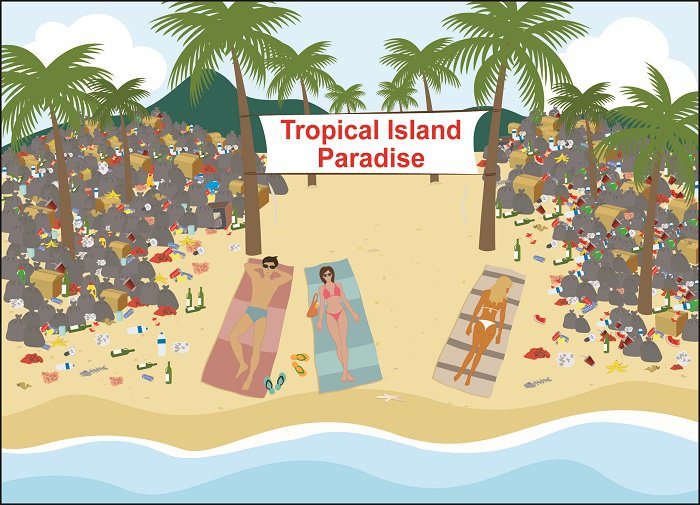 PHUKET: We started 2015 with breaking news of a “private” dump site in coastal Kamala (story here), which is still serving as a pungent reminder that Phuket’s waste disposal problems remain a dire threat to the island’s future. Now, as everyone returns to work and the year begins in earnest, we must face the fact that current strategies are not working – an overhaul is needed in how we think and deal with the waste generated by our ever-growing population.

The relative merits of waste-to-power incineration aside, continual addition of capacity at the Saphan Hin plant is not a long-term, sustainable solution.

The need to truck all of the island’s garbage through the narrow streets of Phuket Town to reach the facility is hugely expensive, worsens traffic congestion and leaves our streets covered with putrid swill – another turn off for tourists.

The fact that the facility and the landfill that surrounds it are adjacent to the island’s most popular public park is as hard to fathom as to why it was built on top of a mangrove forest.

Phuket’s growing population, plus the fact that the majority of residents and visitors seem to be brainwashed by a capitalist culture of over-consumption, is a big part of the problem.

Cleaning up after oneself is a skill that should be engrained in all people from the youngest possible age, thus preparing them to become responsible, civic-minded adults – the kind that limit their negative impact on the environment.

Sadly, for most people growing up in our country, training in how to keep things tidy typically ends at the family property line. It is this mentality that makes illegal dump sites so common here, even as the island continues to brand itself as a “tropical island paradise”.

The lame official response to the crisis in Kamala is just the latest example of a lack of leadership where it is needed most: solid waste disposal at local and community levels.

The official involved responded in typical fashion by saying “we are working on it” and “we don’t yet know who owns the land”, as if such information is somehow unattainable.

Kamala and Patong suffered more damage from the 2004 tsunami disaster than any other jurisdictions on the island, yet managed to eventually recover and dispose of enormous amounts of debris without creating putrid, coastal landfills that conjure up dystopian images of mountains of garbage like those depicted in the 2006 film Idiocracy.

Whatever its exact origins, the Kamala dump site has shown us once again what invariably happens when local island administrations do not nip dumping problems in the bud before the piling-on effect kicks in.

Each local administrative body should have cost-effective systems in place that force people to separate toxic waste from the main waste stream, while re-using and recycling waste as much as possible. Unfortunately, as this most recent debacle demonstrates, there is still a long, long way to go.

Letter from the Governor: Let your children know you care