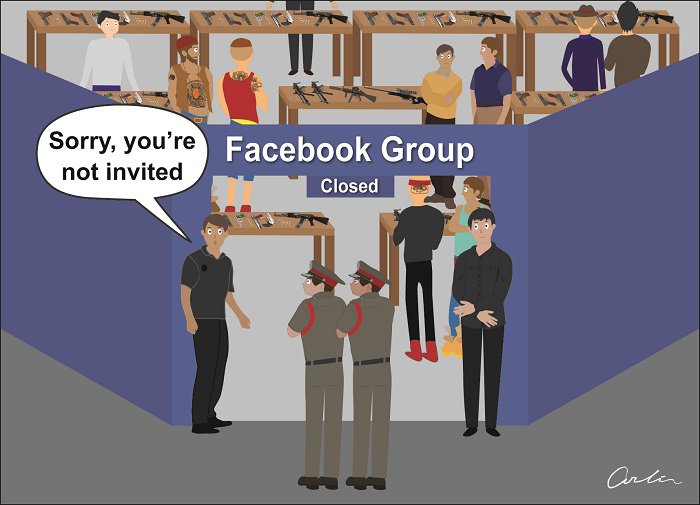 PHUKET: The wide-scale presence of homemade guns is nothing new in Phuket, but the increased ease with which potential buyers can source firearms through the social media should be a source of great concern for law enforcement agencies – as well as society at large.

The revelation that these gun purchases are now often conducted through social media platforms, such as closed Facebook groups, should come as little surprise. The news follows reports that social media apps, together with the Thai government postal service, were already being widely used by drug dealers as the most cost-efficient and reliable method to get their illicit contraband to buyers (story here). First drugs, now firearms – is anyone really surprised?

Like many countries, Thailand has developed a gun culture that purportedly has its roots in hunting and the perceived need for self-protection, especially in rural areas where the presence of any official law enforcement has historically been minimal or non-existent – such as the United States in the days of the wild, wild West. But like most countries across the globe, Thailand is becoming increasingly urbanized. In almost no other province in the Kingdom is this trend more apparent than right here in Phuket, with its growing population and all the social and environmental problems that inevitably come with it.

We concede that firearms can be a very effective form of personal protection under the right circumstances – such as when used by professionally trained soldiers during war.

Fortunately, however, Thailand has an enviable track record for peace with its neighbors, not having been involved in a major conflict with bordering countries for centuries.

Given our increasing urbanization and lack of serious, external military threats, Thailand should try to follow in the steps of the many European nations that have successfully managed to largely rid their societies of firearms.

Unfortunately, this Land of Smiles now seems to have drifted into something more akin to the inexplicable gun culture that prevails in the United States, where hardly a week goes by without reports of some needless shooting tragedy.

Most of these have little or nothing to do with personal protection and are more often linked to depression, paranoia, anxiety and other forms of mental illness. From a completely cynical viewpoint, allowing crazy people access to firearms may be the ultimate weapon when it comes to global population control.

But cynicism aside, as Thailand’s only island province, Phuket has some natural advantages when it comes to keeping the island free of firearms and other contraband. Hopefully, now that the Police Region 8 Headquarters is fully functional on Phuket, the commander there will realize this potential at his doorstep and replace the permanently saluting police mannequin at the checkpoint with real officers and police dogs to conduct random inspections of vehicles coming onto the island.