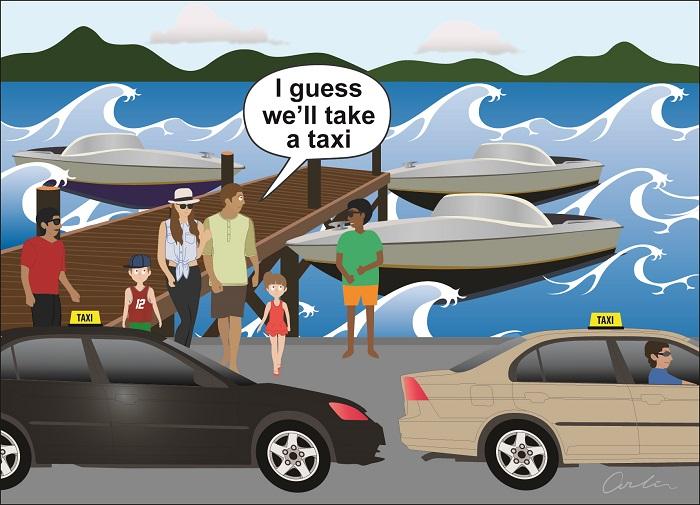 PHUKET: It is hard to believe that 25 million baht in funding has been approved for the design and environmental impact assessment (EIA) for the proposed ‘From the Boat to the Plane’ project.

There is certainly no question that public transport from Phuket International Airport (HKT) to the island’s west coast resort towns is in dire need of improvement, but the answer lies in tackling onshore issues – not taking to the high seas to avoid them.

The list of serious concerns and drawbacks to the controversial project is far too long to be listed in this space. What appears clear, however, is that none of the project’s proponents seem to have taken the time to view how the project, if it ever could come to fruition, would be viewed in the eyes of inbound tourists disembarking at HKT.

Upon arrival, the vast majority of tourists – especially those on long-haul flights – simply want to clear customs and immigration and get to their hotels as quickly and efficiently as possible. A good number of them will inevitably be tired, grouchy and jet-lagged. Worse, many flights arrive in the dead of night. It is already bad enough that they are greeted at the arrivals area by swarms of smarmy taxi touts, but now we are asking them to be taxied to a pier with all their luggage to take a hair-raising 25 minute speedboat ride in the monsoon season?

It comes as little wonder that some readers who commented on this most ludicrous proposal said they had to check the dateline to make sure it hadn’t been posted on April 1.

The project is the brainchild of Phuripat Theerakulpisut, chief of the Phuket Marine Office and staunch supporter of the island’s infamous jet-ski rental industry, who has now sold his vision to the point where his own office will be able to oversee the lucrative EIA process and project design.

But rest assured, this project will never see the light of day. It will just be another addition to the long list of projects on which millions of baht of taxpayer money is needlessly wasted in the “study” process: think Patong Tunnel and the Phuket international conference center, to name just a couple of them.

One overwhelming drawback that has gone largely unmentioned in all the social media debate is the most obvious: you simply cannot build a permanent pier anywhere along Mai Khao Beach, which gets hammered by Phuket’s strongest currents and heaviest waves most of the year. Some readers will remember the fate of the Coral Reef Squadron dive site in the relatively sheltered Bangtao Bay; it was completely obliterated in the course of just one monsoon season.

The fierce turbulence of the ocean at Mai Khao is also precisely why a proposal to extend Phuket’s short runway into it was met with howls of laughter by engineers when the topic was marketed by a powerful local politician about 20 years ago.

We hope the Office of the Auditor General of Thailand and other agencies with jurisdiction and oversight authority will carefully monitor funding on this latest and most egregious ‘public works’ proposal.

Island View: The laws of smoking

Letter from the Governor: Helping those in need