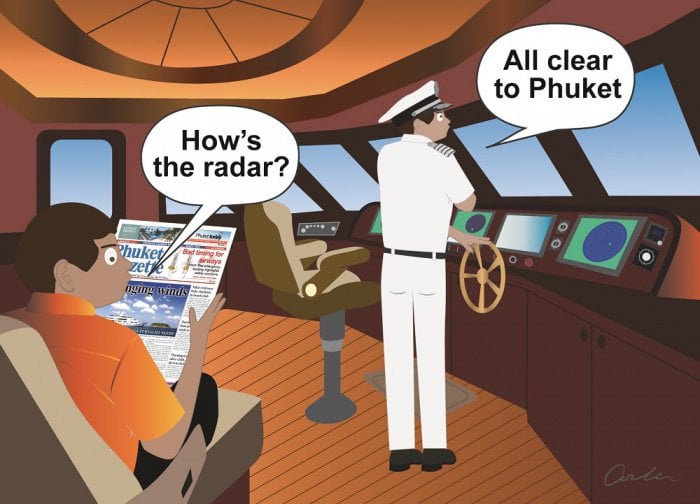 The aim is to further develop the island into its natural role as one of Asia’s premier yachting and cruise ship destinations.

While details of the intended changes are still only very broadly mapped out, they rightfully touch on some of the main issues that have held back marine tourism over the past few decades: immigration problems faced by foreign crew members; lack of appropriate facilities for superyachts and cruise liners; and more incentives for port concession operators to develop the needed infrastructure expansion.

As Thailand’s largest island and only island province, our so-called ‘Pearl of the Andaman’ could hardly be better positioned to capitalize on all aspects of the regional expansion in marine tourism, from daytime sailing charters to the ultra-high-end superyacht market.

Just a three-day sail from Asia’s undisputed yachting capital of Singapore, authorities in both Bangkok and Phuket might start by conducting a detailed comparison of what makes Singapore such an attractive home port for so many foreign-owned vessels – and which procedures and restrictions could be revised or done away with altogether to make Phuket just as appealing.

While Phuket has seen continual expansion in its marine-tourism infrastructure over the past two decades, the fact remains that only a small percentage of inbound tourists include private charters in their vacation plans.

Leaving the issue of democratic development aside, the current administration with its extraordinary powers is in a prime position to make the necessary sweeping changes needed to propel Phuket from a regional yachting hub into a global yachting superpower and a magnet for more of the world’s most impressive privately-owned vessels, of which some 250 made ports of call in Phuket last year.

The key piece in the puzzle will be whether or not the government finally takes the necessary steps to allow for long-overdue developments at the Phuket Deep Sea Port. The port needs to better accommodate more year-round visits by superyachts, as well as more large cruise liners and visiting foreign navy ships calling in for rest and relaxation, which are yet another huge source of tourism-revenue potential.

Minister Kobkarn has made it clear that she would like to see some of the changes in place by year’s end. Given the potential importance to the economy, the Gazette will of course be following developments on this issue very closely in the months ahead.