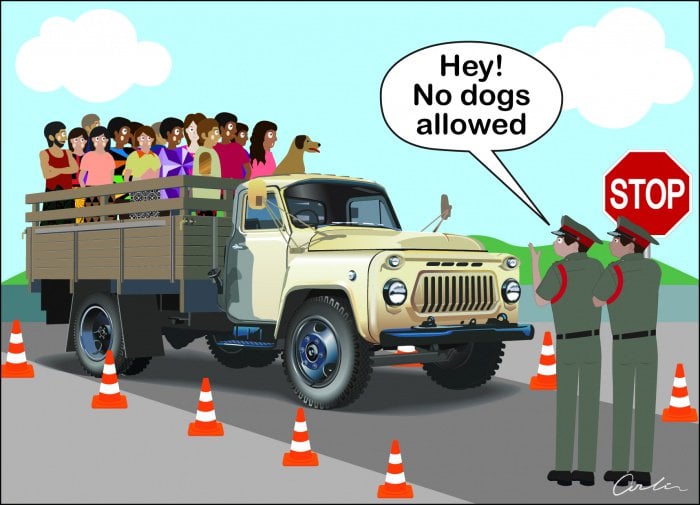 PHUKET: The plan by Rawai Mayor Aroon Solos to ban migrant workers from keeping dogs is unlikely to have much of an effect on dog populations in the area; the scheme not only fails to address the main cause of the problem, but also shifts the blame to the most convenient scapegoat.

Predictably, news of the proposed ban has set off debate in social media. Strangely, however, the debate has focused more on animal rights issues than human rights – in this case, the right (or lack thereof) of migrant workers to keep dogs.

It goes without saying that the majority of people who live in these alleged canine-incubation colonies are migrant workers from Myanmar. Many are laborers with no other alternative than to toil at dangerous, difficult jobs that the average Thai or foreigner would never consider.

Given their tenuous legal standing and subsequent lack of human rights, these workers have long served as scapegoats for politicians, malevolent policemen and other ill-intentioned civil servants, all of whom are well tuned in to the whispered yet widespread anti-Burmese discrimination that lurks just beneath the surface in Thailand.

Try to consider the issue through the eyes of the victims. While some local residents dismiss these camps as slums, they are home to their residents, the Burmese workers. As the place where all of their valuables are stored, they need to be protected – and not just from theft.

Such camps have been the sites of many crimes over the years, such as murder, arson, rape and even attempts at extortion by vile thugs posing as state officers. For the women and children left behind during the work day, keeping a pack of loyal dogs is the best security investment they can make.

While it is inevitable that some dogs will get left behind when the workers migrate to a new location, we doubt that this is a major contributing factor to the Rawai canine problem. After all, the vast majority of the stray dogs in Phuket were already here before the Burmese even arrived in their camps.

A much more important factor is the failure of local pet owners to take responsibility by sterilizing their animals.

To his credit, the mayor of Rawai is studying the legal issues of a dog ban in the camps before ordering any action. We hope he will reconsider and come up with an alternative strategy that will allow these workers to keep their pets.

Fortunately, Rawai is home to one of the best-known and well-funded animal rights groups on the island, the Soi Dog Foundation. We hope the local mayor will continue to work together with the Soi Dog people, as well as other groups and agencies, to allow more volunteers into the camps to provide free sterilizations.

Opinion: Accessing a world of change