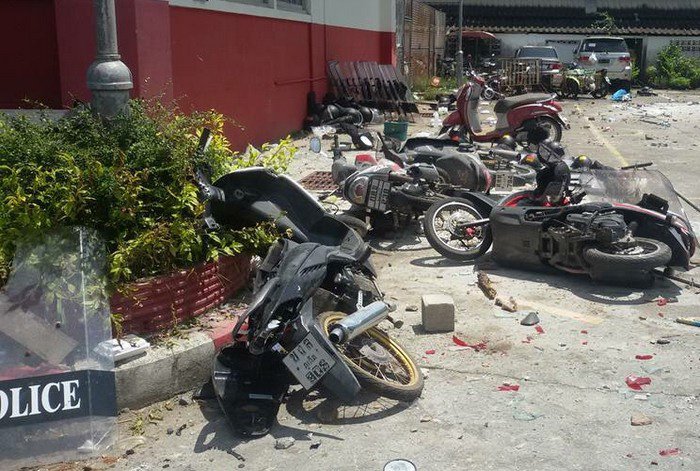 PHUKET: Violence of any kind, regardless of who is involved, should be condemned in the strongest terms. But in the case of the 12-hour riot on Phuket over the weekend, it’s hard not to have at least some sympathy for those who instigated it. The mayhem was the direct result of the killing of two alleged drug dealers who were fleeing the police. We can only ask, again, why petty involvement in illegal drugs must automatically lead to death.

State authorities and members of the public must now, yet again, look into the facts behind this case and meditate on its consequences. The government must now examine, yet again, the lengths to which citizens are prepared to go in search of justice. There are valuable lessons to be learned here, and they are lessons we have been loath to absorb in the past.

Police officers in Phuket’s Thalang district chased two males, ages 22 and 17, who were riding a motorcycle. Both suspects ended up dead. Nearly two hours later the police declared that 50 methamphetamine pills and a kilogram of kratom leaves, a banned intoxicant likened in effect to opium, were found in their possession.

By that time grieving relatives and friends of the youths had gathered in front of the Thalang Police Station demanding an explanation for the killings and a chance to see the four officers involved in the chase. A mix of outrage and curiosity soon swelled the crowd’s numbers to 100, shutting down the road out front, and still no answers were forthcoming to calm their mounting anger.

A gunshot – or something sounding like one – was heard, and the citizens presumed the police had fired at them, so what had been a protest became a full-scale siege. Sticks, stones and eggs were hurled at the station and police vehicles and other cars parked nearby were set on fire.

With the situation out of control, the police still managed to escort the four officers involved in the chase away from the station, and reinforcements were summoned to help the rest trapped inside.

The appalling situation finally came to an end when a military officer intervened, but clearly this case is not going to be so easily resolved. As yet, justice appears to be far from done.

To begin with, suspicion of involvement in the illicit drug trade is no excuse for extrajudicial killing, should that prove to be what happened on Phuket.

Secondly, the police are not allowed to fire their guns at suspects except in self-defence, and even then, there are firm guidelines for any given situation. For self-defence to be claimed, the suspects would also have to be carrying weapons and showing intent to harm.

Quite apart from then-prime minister Thaksin Shinawatra’s ‘war on drugs’, when suspects were routinely gunned down, we have seen too many other fatal police shootings in this country. The police have duly reviewed their operating procedures and announced their adherence to ‘Rule No 1’: those who enforce the law must abide by the law. However, some in uniform are not getting the message.

Thirdly, in spite of their anguish, the protesters in Phuket should have remained calm. Justice is to be sought out by peaceful means, as afforded by the law and the courts, not by violence. The ill-considered rashness of mob rule allows for no legitimacy. In taking justice into their own hands, they achieved nothing except to damage private property, as well as police property that’s paid for with tax money.

Finally, let this be a lesson to the stern rule of the National Council for Peace and Order and the military-led government: social justice is important to ordinary citizens, and in these empowered times, they are less likely to tolerate injustice. The resentment mounting within can easily boil over into violence.

Island View: Indication of the inconsiderate