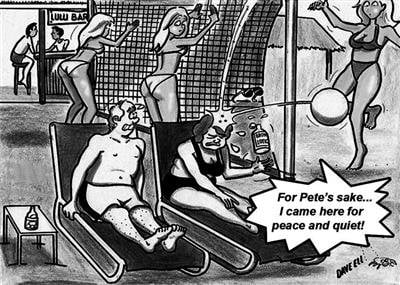 PHUKET: Now in its fourth year, the Phuket Thailand Open beach volleyball tournament last week was the best and biggest ever, with 66 teams from 28 countries taking part.

There was a great deal of excitement during the third-place final, when a large contingent of Russian fans cheered Maria Bratkova and Evgenia Ukolova to an exciting win over Lauren Fendrick and Ashley Ivy of the US.

While the all-US final lacked the excitement of that match, it was nevertheless a masterful performance by world number one pairing of April Ross and Jen Kessy.

So good was it in fact that it left some in the crowd with the same feeling one gets when watching one of the Klitchko brothers dispatch challengers in boxing’s heavyweight division: a strange mix of awe and apathy.

Despite the fact that entry to all of the exciting matches was free of charge, there were quite a few empty seats throughout the tournament, including the championship match.

A look in the stands throughout revealed that most of those who came out to enjoy the play were foreigners, not Thais.

All this begs the question: with such attractive, world-class athletes; excellent organization; strong pre-event publicity; a nice breezy venue and no admission charge, why hasn’t the event – and beach volleyball in general – failed to really take off among Thais?

Some have suggested that it may be that Thailand lacks the kind of ‘sporting culture’ found in Western countries, but this is probably not the case.

Thais get just as riveted by sporting events as any others, provided they have a horse in the race. Anyone who can remember back to the days of Khaosai Galaxy’s reign in prizefighting and the excitement his title defenses generated can attest to that.

Unfortunately, too many people in Phuket nowadays try to recreate this passion artificially, by betting on matches.

Getting back to beach volleyball, it is likely more Thais would have turned out to watch if the five Thai pairs were not eliminated from the competition so early on.

Another factor is the sun. While hanging out by the beach on a sunny day might be the Western definition of bliss, most Thais still see the fiery orb as something to curse, not worship. Perhaps playing at night under floodlights could be a partial solution – it seems to work for tennis.

Whatever the case, the Phuket Thailand Open continues to grow. This year seven teams took part in an amateur event for hotel workers that ran concurrently and drew good crowds of supporters.

Next year, event organizers Pentangle Promotions hopes to expand this amateur tournament and hold workshops at local schools to get more youth involved. These are positive steps in helping this fun and very healthy sport to really take hold here.