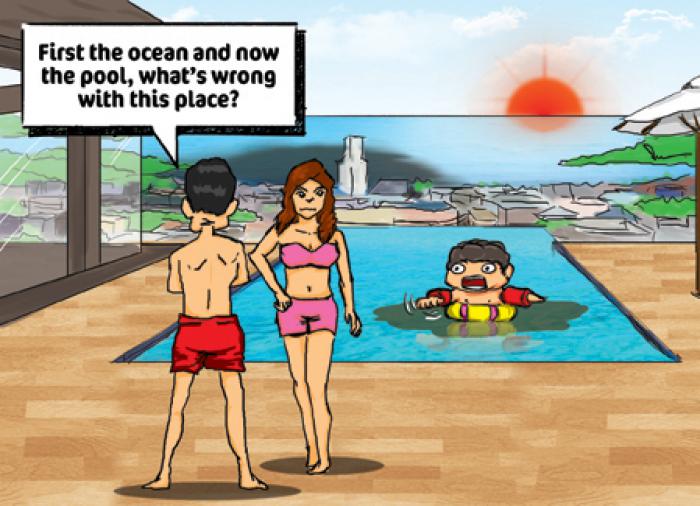 PHUKET: Hardly a week passes nowadays without a damaging news report about water-related issues in Phuket. Of these, none could be more harmful to the island’s reputation than reports of untreated wastewater flowing directly into the sea at some of the island’s most popular beaches.

Such reports are nothing new. Sadly, untreated wastewater entering Patong Bay is now so common that it is hardly considered newsworthy. Judging from the lack of real debate over environmental issues in the current mayoral campaign (story here), it appears little change can be expected, and that the town will simply continue to rely on its “onshore attractions” to keep the tourists coming.

Yet the emergence of similar problems at other west coast beaches, all the way from Karon to Bang Tao, is alarming; these resort beaches tend to cater to clientele who rightfully expect better.

In Cherng Talay, work on a 320mn-baht-wastewater-treatment project has stalled; the state of water where Bang Tao Canal reaches the sea is often in a putrid, potentially dangerous state.

To the south in Kamala, residents confronted with similar problems are also calling for a similar project, with a similar price tag (story here).

Karon’s problems go back years and have already been the subject of a German documentary that has caused great harm to the beach’s reputation, yet development there has continued apace.

That town’s “black water problem” is now considered sufficiently severe that some local leaders, including many of the same ones who approved all the new development in the first place, are threatening to revoke licenses of hotels found in violation of wastewater release standards.

The unprecedented step of Karon Municipality signing a Memorandum of Understanding (MoU) with the Wastewater Management Authority (WMA), a state agency set up in 1995 to deal specifically with wastewater issues in greater Bangkok, is surely a signal that the island’s water issues are swirling down the drain – out of control.

What a mess; what an embarrassment; what a shame. Many of those among us who had the good fortune of visiting these locations a few decades ago can hardly hold back tears when seeing what has become of them. But even back then, many locals were teaching their kids to swim in pools because seawater was intrinsically “dirty”. Sadly, this mindset has now manifested itself as our depressing reality.

If history has taught us one thing, it should be not to expect any help from Bangkok. The more “help” we get from the capital, the more our island comes to resemble it: black water, traffic congestion and all.

These are local problems that must be solved locally, within each of the communities that allowed them to develop in the first place. Luckily, once the noxious inputs cease, water quality can improve very quickly. However, any number of mega-budget treatment facilities will not solve the problem until the underlying issues – unregulated development, corruption and so on – are finally addressed.

Ticking off the Songkran bucket list – respect before revelry