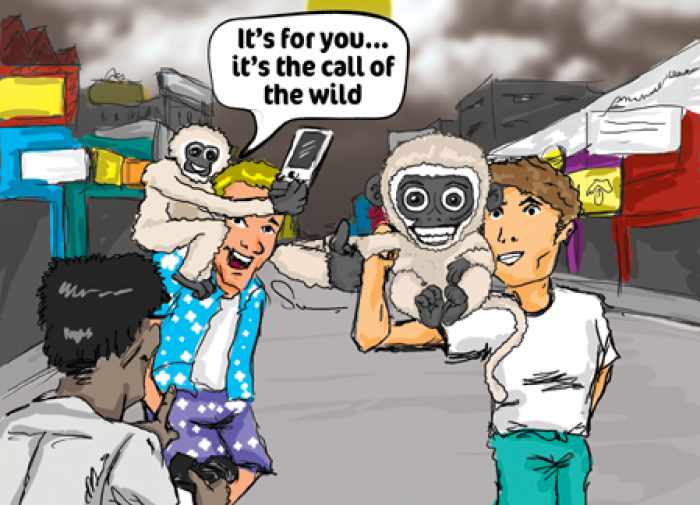 PHUKET: The recent introduction of two gibbons rescued in Phuket into the wilds of Northern Thailand is a landmark achievement for the Wild Animal Rescue Foundation of Thailand (WARF) and the many affiliated groups and volunteers who played roles in making it happen.

We join the rest of the island in thanking them all and wishing them the best of luck in their continuing efforts to help rescued gibbons regain a firm foothold – and handhold – in a region where they had once thrived.

The initial release area, a valley in the Pang Chum Pee Community Forest in Chiang Mai, carefully chosen by researchers, appears to be just the right kind of habitat in terms of food, forest canopy, water availability and climate.

However, it must also have one more vital component if these remarkable lesser apes stand any real chance of re-colonizing what is left of the northern jungles: a local community that is committed to the gibbons’ survival and willing to protect them in the wild.

While the new habitat remains home to some of the gibbon’s natural predators – such as eagles, pythons and wild cats – there is still no greater threat to their safety in the wild than mankind.

It is easy and appropriate to place blame on poachers who callously shoot gibbon mothers before making off with their babies to sell on the black market, regularly in Phuket. The even sadder reality, however, is that these criminals are just the tip of a colossal spear of human ignorance.

Demand for baby gibbons, as well as many other “exotic” animals, starts when ignorant tourists are willing to pay photo touts to have their picture taken with them. It is our collective shame that few places on Earth are more commonly associated with this practice than Phuket.

Fortunately, greater public awareness of the issue – in large part due to the efforts of groups such as WARF – has played a pivotal role in reducing demand. As a result, there have been far fewer reports of such “photo-touting”, especially those involving primates, in recent years.

Police enforcement of the numerous laws and regulations that are broken by photo touts has been poor to non-existent. So indifferent were police to the trade in the past that one officer, when asked why the practice was allowed to continue, actually quipped, “I am a person policeman, not a monkey policeman”.

Fortunately, that attitude has changed considerably in recent years and even more dramatically since the National Council for Peace and Order took power. Now is the time to put an end to this practice once and for all.

No island is immune