More information is now coming to light over some of the background operations at play during the Saturday evening search for a crazed gunman, now dead, who was responsible for the killing of at least 30 people and wounding 58 others. Some of the 30 or so people currently in hospital are reported to be in critical condition… the final toll remains fluid. While most fatalities happened at the crime scenes, two victims died later in hospital during surgery.

The gunman was shot dead by members of a special forces division called ‘Hanuman’ around 9am on Sunday morning. Police have now revealed that they tried multiple times to persuade the 32 year old who had already killed 29, to surrender. They even brought the gunman’s mother to the besieged shopping centre to talk to her son.

The mother, from the gunman’s hometown in Chaiyaphum Province, just to the north of Nakhon Ratchasima, was taken to an area near the Terminal 21 mall but she was unable to get inside, according to security officials, who were unable to decide about the woman’s safety if she was taken in.

The mother, whose name has been withheld, told officials there was little point in talking to her son “as he had depression and an extremely bad temper”.

Holed up inside the shopping centre, the 32 year old gunman had a HK33 assault rifle that he had stolen from his army base located just outside Korat. He also got his hands on 800 rounds of ammunition and two smaller pistols.

Major General Jirapob Puridet was the man leading the security operations inside the building.

“We had to make the move of confronting him. People who were trapped inside a freezing room and sent messages to us that the oxygen level was very low and they were suffocating.”

“So we had to risk to confront him face to face otherwise people who were trapped inside would die.”

“One officer was killed and three others injured during the ensuing confrontation. At certain points the gun firing was nonstop.”

It took several hours for the police to get full control of the situation. Although the 17 hour-long series of events had started around 3.30pm on Saturday afternoon, it took another six hours before officials had the shopping centre and surrounding areas in secure lockdown. During that time the deranged shooter had been live-streaming his rampage in real time. Horrified viewers shared the footage causing a security nightmare for police. They became acutely aware that online coverage of their movements outside and inside the shopping centre were being viewed by the gunman.

Inside the shopping centre, confused shoppers and workers also had to piece together the series of events from the emerging stream of social media and messages.

27 year old Suvanarat Jirattanasakul, told Reuters that the shooter was aiming to kill, there was no mercy.

“It was frightening because I could hear the occasional gunshot. We waited a long time for the police to come and help us, many hours.”

“The gunman was aiming for the heads,” said ‘Diaw’ on local Amarin TV. “He was shooting everywhere and his shots were very precise.”

Yesterday afternoon Thai PM Prayut Chan-o-cha informed media that the rampage was “sparked by an argument the gunman had at his base with another soldier over a land-selling commission fee”.

The prime minister also confirmed that the gunman had taken hostages during the shopping centre seige but didn’t go into detail about how many people were involved or what happened to them.

After shooting his commanding officer and a 68 year old woman, the gunman then shot a fellow officer at the army base. He then took the officer’s gun and shot at other soldiers. After collecting other guns, ammunition and stealing a 4-wheel drive military Humvee. After the shooter drove out of the back gate of the military base, he drove to a temple and then to the shopping mall, shooting civilians along the way. 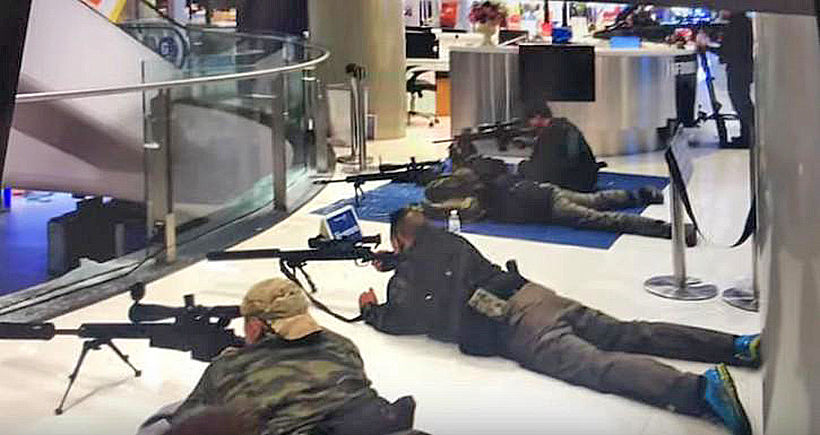 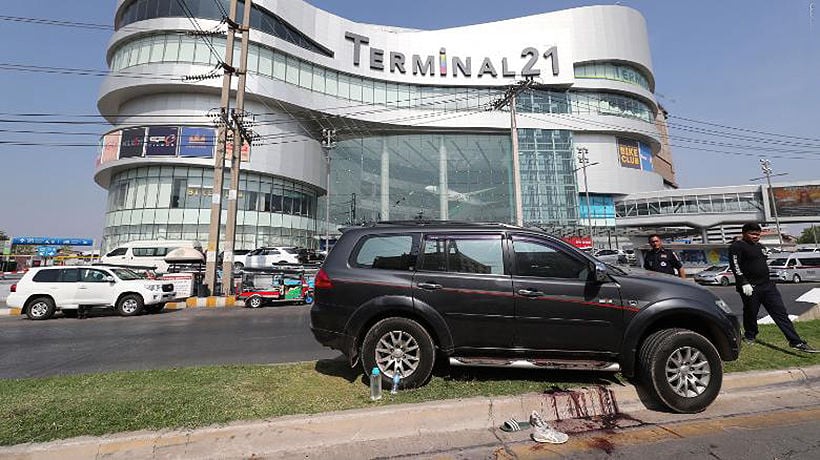