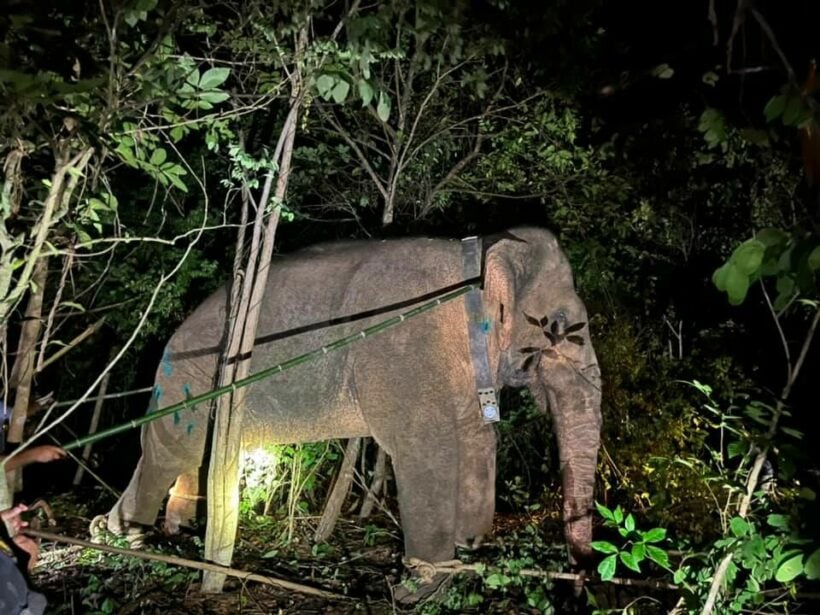 An aggressive elephant wanted for killing an elderly woman and raiding plantations in Prachin Buri has been caught and taken back to a sanctuary after an effort involving around 150 forestry and wildlife rangers as well as volunteers.

The 25 year old hot-tempered elephant had been causing extensive damage to orchards and farms for months, and stomped a 73 year old woman to death as she was picking fruits and vegetables. An official order for the immediate capture of the elephant, named in the document as “Sidor Noke,” had been signed last week by the deputy chief of the National Parks, Wildlife and Plant Conservation Department.

Rangers attempted to lure the elephant to the Khao Ang Rue Nai Wildlife Sanctuary, where he came from, but the elephant returned to the village in the Krabin Buri district, possibly in search of food. The return of the elephant even prompted villagers to put up a sign – even though the animal cannot understand – telling the elephant to stay away from the community.

In another attempt to bring the elephant back to the sanctuary, 150 forestry and wildlife rangers from Protected Areas Regional Offices 1 and 2, as well as volunteers, worked together to track the animal. Once they found the elephant, tranquilliser darts were fired to safely capture the elephant. A backhoe was then used to load the animal onto an army truck and drive to the wildlife sanctuary in the Sanam Chai Khet district of Chachoengsao, which borders Prachin Buri.