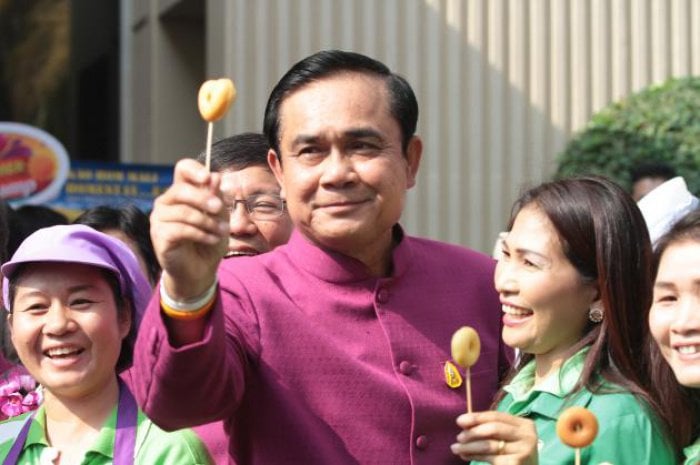 We will try to cut use of military courts: Prayut
The Nation / Phuket Gazette

PHUKET: IN reaction to growing opposition, Prime Minister Gen Prayut Chan-o-cha said yesterday he would try to reduce the use of military courts for trials involving civilians held under martial law – if it does not affect national security.

The PM said the enforcement of martial law was also being relaxed and ordinary laws increasingly being used to deal with situations.

As for the arrested volunteer nurse Nattha Meewangpla, PM Prayut said she has been handed over to the police after she was found linked to the hand-grenade attack on Criminal Court.

PM Prayut added he has not been banned from visiting the United States and that a remark he made earlier was a joke. He said he would attend the UN General Assembly in New York in September.

His remarks came amid growing calls for an end of martial law and use of the military court for trials involving civilians.

Human Rights Watch said yesterday that charges against peaceful critics of the military government of PM Prayut should be immediately dropped and civilians not tried in military court.

Human Rights Watch cited charges laid on Monday against four members of Resistant Citizens who face the military court for peacefully protesting against the coup last month. They were accused of violating the ban on political activity and holding a public gathering of more than five people. The four were holding a mock election and calling for martial law to be revoked. If found guilty they could be jailed for up to a year and fined up to 20,000 baht.

Human rights lawyer Anon Nampa, one of the four, faces an extra charge under the Computer Crimes Act for criticizing the military on Facebook in five posts that could see him sentenced to up to 25 years in jail and have to pay a fine of 500,000 baht.

HRW said that hundreds of people, most of them political |dissents, have been sent to trials in military courts since the coup.

“The rolling crackdown on civil and political rights in Thailand continues without let-up,” Mr Adams said. “Promises to respect human rights and restore democracy are constantly contradicted by the junta’s actions.”

In a related development, the UN Human Rights Council in Geneva has received complaints about the use of military tribunals against civilians.

In another related development, First Army Region Commander Lt Gen Kampanart Ruddit defended the use of military courts, saying only those who violated the orders Nos 3 and 38 of the National Council for Peace and Order (NCPO) face military court.

Gen Kampanart said he understands the university students who demand an end to the use of military courts on civilians and added that they would not be invited to ensure they have a “proper understanding”.

Deputy PM and Defence Minister Gen Prawit Wongsuwan said the government would judge the country’s situation on whether martial law should be lifted. He was responding to National Legislative Assembly (NLA) president Pornpetch Wichit-cholchai’s suggestion that the government lift martial law in August.

Gen Prawit insisted that the government would not act beyond the scope of law following calls for the government not to try cases against civilians in military courts.

NLA president Pornpetch said at a seminar panel that trying lese majeste cases in military courts helped reduce the number of cases. He said although protecting the monarchy was not political, the institution was highly valued by Thai people. The National Council for Peace and Order wanted to use strong medicine to curb lese majeste crimes either on social media or in general.

He said if the situation subsided, he believed the NCPO should use less “strong medicine”. He thought the NLA may propose less severe action against offenders if the drafting of the new charter is almost ready in June or August.

“I want to balance the power of the state and human rights. This balance can be changed depending on the situation,” he said.