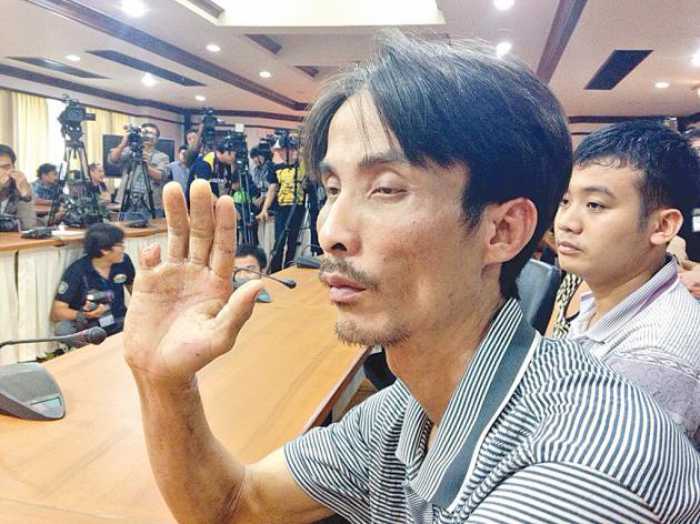 PHUKET: Three Vietnamese men are in police detention for allegedly kidnapping and chopping off their victim’s finger in an unsuccessful attempt to extort Bt1.5 million from his family.

The victim, who is also Vietnamese, had reportedly been tortured throughout the ordeal.

The suspects were arrested after they jumped into the sea from a Pattaya pier in a bid to escape police late Friday night. Police used boats to capture them.

Police held a press conference yesterday to announce their arrests.

“We will also go after their two Vietnamese accomplices who are still on the run,” he said.

The alleged accomplices have been identified as Thong Sin, also known as Sornram, 30, and Nguyen Tien Lap, 25.

Police alleged the five suspects kidnapped Ball, a fish vendor, from the ground floor of his condo building in Nonthaburi on September 12.

Police said Ball’s family could provide only a part of the Bt1.5-million ransom demand, prompting the kidnappers to cut off Ball’s little finger on the right hand. They sent the severed finger to Ball’s wife, who then lodged a complaint with the police.

Police quickly tracked the kidnappers to a deserted house in Pathum Thani. Ball was found chained in a bathroom with wounds all over his body. The kidnappers were not there.

Police then learned that at least three of the kidnappers were in Chon Buri and arrested them.

“Some of the five suspects also kidnapped an eight-year-old Vietnamese boy from Ayutthaya for a Bt80,000 ransom in May,” Srivara alleged.

Speaking at the press conference, Ball said he did not know any of his alleged attackers previously.

The three suspects in police detention allegedly said they had targeted Ball based on a plan devised by Thong Sin, who promised to pay them Bt10,000 each, and Nguyen Tien Lap cut off the finger.

The trio has been charged with kidnapping an adult, causing serious harm to their victim, and illegally detaining others.