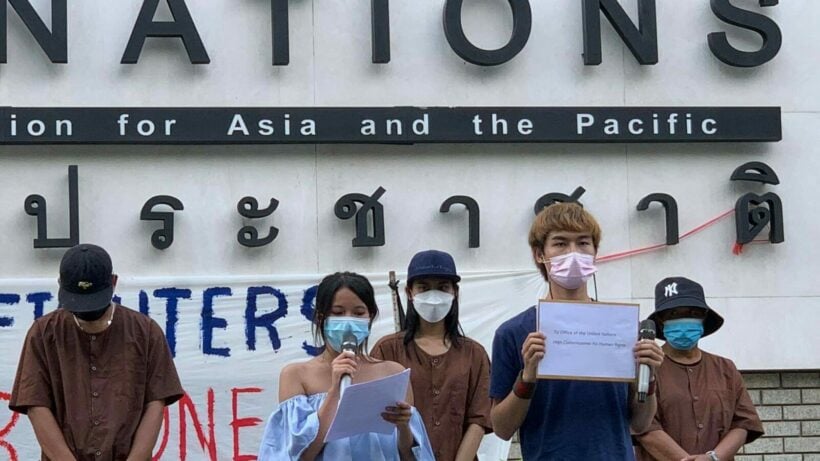 The pro-democracy group “Thalu Fah” delivered a letter requesting international support from the Office of the Economic and Social Commission for Asia and the Pacific of the United Nations in Bangkok, yesterday. They then gathered outside the office for a couple of hours of protest.

After delivering the letter to the United Nations, the group offered nearly 2 hours of silence while they displayed signs in English telling the world that Thalu Fah’s leaders are fighters and not criminals. The signs also demanded that Prime Minister Prayut Chan-o-cha resign.

“We are requesting OHCHR to investigate and officially oppose the arrest of our leaders from the Thai government who are stopping our right and freedom”, says Songphon.

Faraday
1 hour ago, Rain said: And some wiser folks might suggest that this fashionable newer generation aren't all that. And some might not.

Rain
35 minutes ago, Stardust said: Which wiser folk? The salim? The incompetent clowns who are in charge? As I worked for international companies I can assure you they would not get any job there or can pass a interview. By…
Stardust
4 minutes ago, Rain said: So....you're assuming that such wiser folks that I speak of come from the elite/establishment class? Wow. I am asking which wiser folk you mean? It can't be academics or any intelectual elite because I know…

Poolie
Always makes me throw my eyeballs at the ceiling when some jumped up little foreigner says 'most Thais that I know......' What you mean eight, ten, be generous, fifteen?

Rain
21 minutes ago, Poolie said: Always makes me throw my eyeballs at the ceiling when some jumped up little foreigner says 'most Thais that I know......' What you mean eight, ten, be generous, fifteen? Might be more pretentious to suggest…