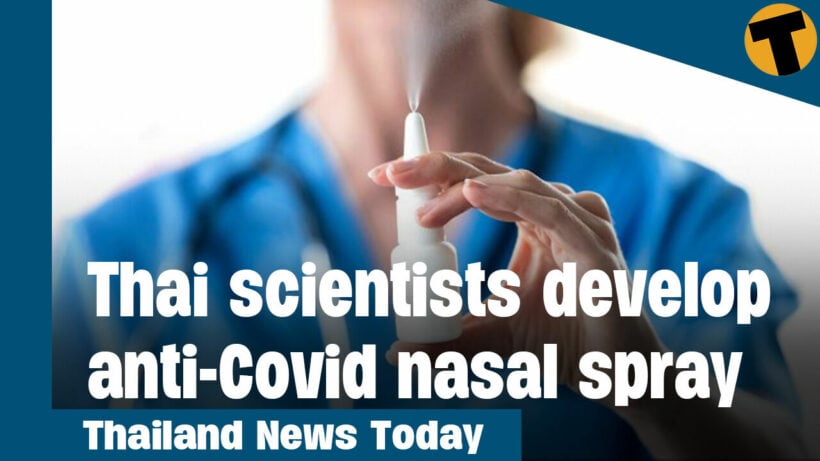 A new “anti-Covid-19” nasal spray that is being developed by Thai scientists is expected to be available to the public later this year.

In studies using lab animals, the nasal spray has been shown to block the virus from entering the body. The Health Systems Research Institute, Silpakorn University, Chulalongkorn University, the Government Pharmaceutical Organisation and an unnamed private bioscience organisation are working together to produce the spray.

Since the outbreak of the coronavirus two years ago, a group of researchers has been working on the spray with funding from the business sector and the state-run HSRI.

A collaboration agreement has been inked to manufacture the anti-Covid-19 nasal spray, which could be a topic of global study. The research has advanced to the point where a prototype antibody has been obtained and patented.

The invention is being handed to the commercial sector, which is doing medical studies to meet the criteria required for registration with the Thai FDA.
According to the Dean of the Faculty of Medicine at Chulalongkorn University, the spray is expected to be ready to buy in the third quarter of this year.
The spray is based on a previous study that used a monoclonal antibody collected from recovered Covid-19 patients.

With the government scrapping the Day 5 requirements for Test & Go travellers, over 2,000 hotels and their partner hospitals or test centres are being asked to refund the costs of a night stay with PCR testing.

Under the revised entry requirements, travellers can take a self-administered antigen test instead of a PCR test on the fifth day of their stay and they are no longer required to book a stay at an approved hotel while they wait for the results.

The hotels are being asked to voluntarily refund the cost of the room, or at least convert the pre-paid booking into credits. Hoteliers are also being asked to work with their partner hospitals and testing centres to refund the 2,000 baht for a PCR test.

The Thai government has said they will not make it mandatory to issue refunds for the Test & Go packages, but an official from the Tourism Authority of Thailand argues that some hotels have said they need a legal order from the government as their cancellation policies do not cover the refund. According to the TAT deputy governor for marketing communications Siripakorn if a full refund is not possible, they will be asked to convert the payments into credits.

The Day 5 requirement for a hotel stay with PCR testing was put in place earlier this year due to the rapid spread of the Omicron variant in Thailand. But the Day 5 requirements discouraged a number of travellers from planning a trip to Thailand and were scrapped by the government, taking effect today.
Travellers must still stay at an approved hotel on their first night in Thailand while they wait for their results from an on-arrival PCR test.

Sirapakorn says a total of 77,851 people have registered for entry and have already paid for a hotel room and a second PCR test. He added that around 20% to 30% are locals who will most likely ask for a refund for their hotel room as they have homes in Thailand.

The Thai Cabinet is discussing a number of measures aimed at mitigating the fallout from Russia’s invasion of Ukraine.

A Government spokesman says PM Prayut Chan-o-cha will meet with officials to discuss the impact on the economy, in particular on global energy prices and instabilities in the equity and cryptocurrency markets.

Thailand’s Energy Minister says officials continue to monitor developments closely and, while Thailand’s energy imports are not affected, the government will increase stocks to ensure the public is not impacted.

Meanwhile, A report says that Thailand’s Finance Minister Don Pramudwinai has welcomed news of talks between Ukraine and Russia and hopes that the international community will cooperate seriously to resolve the conflict and have it contained.

The Finance Ministry also plans to hold talks with the Bank of Thailand to prepare for any future impact on the Thai economy. Minister Arkhom Termpittayapaisith says the talks will focus on the decision by the US and its allies to cut off some Russian banks from the Swift financial system, crippling their access to international transactions.

A friend of the Thai actress who was found dead in the Chao Phraya River in Bangkok reenacted the celebrity’s fall off the speedboat. She claims the actress Tangmo fell in the river while she was trying to urinate off the back of the speedboat.

Many people, including Tangmo’s mother, have speculated the claims and suspect foul play. Tangmo was also wearing a bodysuit, which would’ve been difficult to take off. Officers now say they will use lie detectors when questioning those who were on the boat.

One of Tangmo’s friends, identified as “Sand,” who was on the boat the night of the incident was asked to reenact the fall at the Piboon Songkram Pier. Reenactments are a typical practice in Thai law enforcement, sometimes attended by a crowd of reporters and locals.

Reports in Thai media say Sand could not remember exactly where her friend had fallen. Sand wore a life jacket and went onto a speedboat, which was the same model as the one Tangmo had fallen off of. Police drove the boat to a spot under Rama 8 bridge where friends claimed they had been taking photos before the accident happened.

Then, police drove the boat to the spot Sand claimed Tangmo had fallen. Sand reenacted how Tangmo went to the back of the boat and how she held her legs to pee, showing that she fell into the river.

Thai media says the police will question more witnesses as well as three local fishermen who say they saw the boat that night. The speedboat’s propeller will also be removed and taken in for a DNA screening. Other evidence found on the boat, including wine bottles, will also be examined.

Political activist and human rights lawyer, Anon Nampa, has been granted bail by the Bangkok South Criminal Court. The Ratsadon pro-democracy group leader has been in custody for over 200 days, on charges of lèse majesté and other charges related to political protests.

His temporary release was tweeted by Noraseth of Thai Lawyers for Human Rights. According to him, the Bangkok South Criminal Court says Anon offered his own bail terms, which include refraining from doing anything to insult, criticise, or otherwise defame the monarchy, as well as not participating in any activities that could cause unrest in Thailand.

According to a report, Anon has been in and out of prison 7 times in the last year. In August 2020, he became the first person to publicly call for reform of the monarchy. Norasate says bail was set at 200,000 baht and Anon has been released until May 28. At the end of that period, he has the right to re-apply, but equally, the court can revoke bail at any stage if Anon fails to comply with the agreed conditions.

Last week, fellow pro-democracy activist Parit Chiwarak was also released on 3 months bail under similar conditions. He too has spent over 200 days in detention on similar charges.

Ukraine Embassy in Thailand asks for donations to support its citizens, save lives