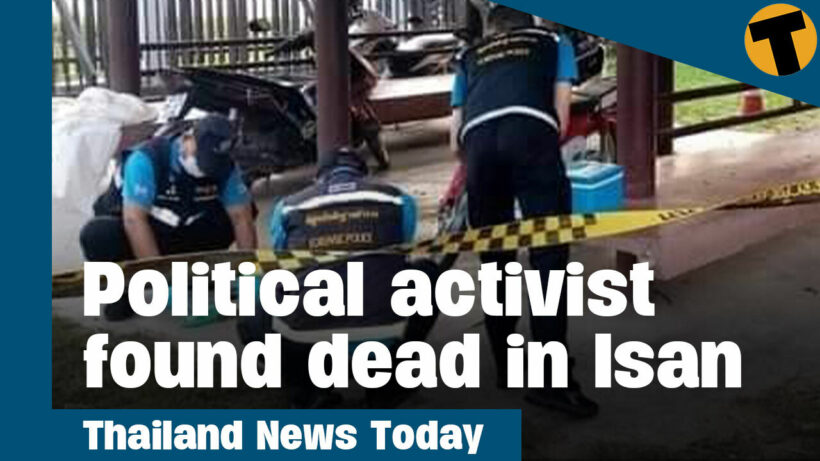 The Ministry of Public Health reports that Thailand will receive 2 hundred thousand Covovax vaccines from India today. Public Health Minister, Anutin Charnvirakul, will be on call to receive the vaccine delivery personally.

The Director-General of the Disease Control Department, Dr. Opas Kankawinpong says that the Covovax vaccines were donated by the QUAD, or the countries that agreed on Quadrilateral Security Dialogue donated, including the US, India, Japan, and Australia.
Covovax is an Indian version of the two-dose Novovax vaccine developed in the US.

The authority added that Covovax was very new and not many exports had been made since they started manufacturing in India.
The second dose, of the two-dose vaccine, would be given after 3 weeks. The vaccine was recommended for unvaccinated people or people allergic to other Covid-19 vaccines.

The Thai public health authorities say it will need more studies before it is offered as a booster in Thailand.
Anan Jongkaewwattana, the Director of the National Centre for Genetic Engineering and Biotechnology, reported on his Facebook page that the vaccine was manufactured in India with the same technology as the Novavax vaccine.

Thailand’s transport ministry announced yesterday that two new Bangkok rail lines have been delayed. The lines are the SRT’s Light Red Line, and the MRTA’s Orange Line, both of which will connect with Siriraj Hospital. The ministry’s permanent secretary said the two transit lines have not yet been built as the ministry is still working on a feasibility study. He said the ministry will suggest the Public-Private Partnership model fund the SRT project.

Yesterday it was announced that the new monorail pink and yellow lines are nearly completed and will provide free transport to passengers for a trial period later this year.

The permanent secretary also said the MRTA is drafting a proposal for a joint venture investment plan for the light red and orange lines. He said the transport ministry is now preparing to extend a memorandum of understanding for the project. The MOU is currently due to end on May 1st.

Part of the plan for the lines is that a new hospital building will act as an interchange for them. The building, which will be located on the riverside, will also include a car park and service area for commuters in Bangkok as well as hospital visitors. Siriraj Hospital is located on the west side of the Chao Phraya, opposite Bangkok’s most historic area of Rattanakosin Island.

Siriraj Hospital has been a site of advanced medical innovation. In February, doctors there announced that for the first time, they replaced an entire knee joint on an elderly patient using a robotic arm. The robotic-arm assisted surgery was developed for knee replacements. It does a CT scan of the patient, creating a 3D image and helping surgeons create a plan. The technology guides surgeons on precisely where to cut, avoiding incisions on sensitive areas such as blood arteries and nerve endings.

Phuket officials plan yet ANOTHER event to draw in tourists and rake in cash for locals devastated by the government’s reaction to Covid-19. This upcoming event, called “Phi Muang Nong’s House” will be held Friday through Sunday, April 22-24, from 5pm onwards, at Sarasin Bridge… the 300 metre bridge which connects mainland Phuket and Phang Nga. What’s the event’s main feature? Mini hot air balloons!

Another hot balloon event was held in Kathu, next door to the British International School, on an open field about 5 years ago, including a local music festival and food (that field is now a new housing development).

Phuket Vice Governor Anuphap attended the press launch for the event, along with the vice president of the Phuket Provincial Administration Organisation. The PPAO is organising the event. The PPAO’s vice president, Wiwat Jindapol, said this will be the first time ever having mini hot air balloons on Sarasin Bridge.

“Visitors can take photos with a 30 metre long tunnel of lights, as well as a colourful replica of the mini air balloon on stage”.

As with all similar events in Phuket this year, fresh seafood and other local products will also be sold, and there will be a concert and live entertainment. Wiwat said in addition to helping revitalise Phuket’s fractured tourism economy, the event will also help “build relationships between our brothers and sisters of Phuket and Phang Nga”.

Phuket officials have organised several festivals in the past few months, aiming to provide income to local farmers and food sellers. Two seafood festivals have been held in the island province this year, one the Roi Rim Lay festival, and a new one called the ‘Tasitval‘. Roi Rim Lay featured live ‘Luk Thung’ Thai folk music, in addition to seafood.

A male political activist and finance officer of the Move Forward Party has been found dead in the Isan province of Nakhon Ratchasima. Initial reports suggest that he hanged himself at a bus stop near a police booth in front of the district office. But his mother believes her child was murdered as wounds and “mysterious evidence” have been identified.

On April 19, at about 3.40 am, a police officer says that he heard a dog barking loudly while working inside his police booth. He decided to check it out and found a corpse hanging in the bus stop pavilion. The death was reported to be a 27-year-old Anan “Boy” Logate, a political activist and finance officer of the local Move Forward Party.

According to Thai media, Boy visited Nakhon Ratchasima to join a seminar at Fortune Hotel Korat. He left his house in Isan province Roi Et on April 16, checked in at the hotel in Nakhon Ratchasima on April 17, joined the seminar on April 18 until 12 pm, and disappeared. His friend had tried finding him and reported the missing to the officers at Mueng Nakhon Ratchasima Police Station before his corpse was spotted.

Boy’s mother, Noopit Logate, has told the Thai media that she didn’t believe her child would commit suicide because they had just met and dined together during Songkran. She say that Boy didn’t seem to be worried or stressed about any problems. She added that suicide seemed unlikely because her child was a political activist, a fighter who faced many difficulties in life.

The rescue team told Thai media that Boy had a wound on his head, some scratches on his hands, and a bruise on his back. His clothes were dirty, and his pants were wet around his legs. Nearby, the rescue team found blood and sunglasses which have not yet been identified. The spokesperson rescuer also said that Boy’s tongue was not hanging from his mouth, usual for a corpse that died from hanging.

Boy’s corpse was sent to Chalerm Prakiat Hospital for an autopsy. The Secretary of the Move Forward Party, Chaithawat Tulathon, said that he and the party couldn’t provide any details at this time. They had to wait for the autopsy result and information from the police and relevant departments.***

A woman has claimed a group of 17 police officers in the Isan province of Amnat Charoen invented a ‘fake crime’ involving her to advance their career. She claimed she had been working as a ‘spy’ for the local police for more than 20 years. But the officers wanted to get promoted, so they conspired with her, insisting that the penalty would only be a fine (which they would pay for). Instead she faced four years of jail time.

Yesterday, the 43 year old woman, Rampai or Miew, and her lawyer, visited the Central Investigation Bureau to complain against 17 police officers for alleged malpractice. On May 12 last year, Rampai said she agreed to be a suspect who was charged for providing an “informal debt arrangement”. She claims that the police had already prepared the money to bail her out, as part of an agreement between them. She was told she just had to “play a part”, pay the fine and go home.

So the swindle was set up. She was arrested with fake evidence including two fake accounts and 200 baht cash at a market in Amnat Charoen province. She was then paraded at the police station to sign a court document. That should have been the end of her involvement, but she then discovered she would have to present herself to court.

She had just come out of jail from an old sentence on drug cases, and the re-appearance in Court, which was not part of the ‘story’ would not go well for her. She said she faced a 4 year jail time in court and had to bail herself out to seek justice in the scam-gone-wrong.

Her lawyer added that she wasn’t the only one. There were other locals, both teenagers, and adults, who revealed to the lawyer that they were also set up with promises to share the spoils of scams with the police, as long as they played their part.

His lawyer says that the CCTV camera at the market didn’t record any arrests on that day too. He added that the had a message and phone call history saved and audio files of the conversations where police threatened her to stop revealing stories. She has submitted the files to authorities as evidence.