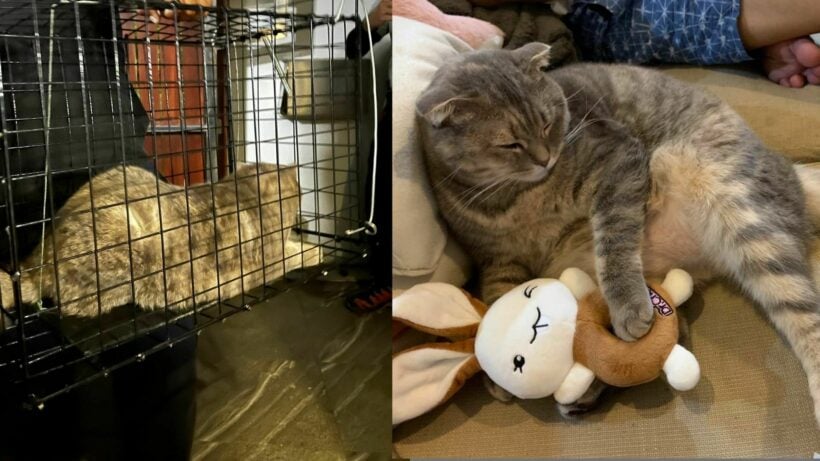 Manee has been in kitty quarantine since being found near her home in Nonthaburi. Credit: Khun Mae Mimi | Facebook

Who let the cat out? A chubby kitty who ran away has wandered back home all on her own (as some cats do). Manee, a Scottish Fold, had been missing since Sunday, until 1am yesterday, when a security guard at a residential compound in Nonthaburi province, north of Bangkok, spotted her and she dashed into a neighbour’s home.

She was found safe and sound, albeit thinner and with a bit less fur. She also had a low temperature and a wound on her chin. The fat cat’s owner — “Mimi” — had offered a fat reward to the tune of 300,000 baht for whoever found her beloved feline. When the cat went missing, Mimi posted an announcement on her Facebook page, saying…

“The amount of this reward is plenty to buy many cats but no cat is as valuable as an intrinsic value. Please help the kitty out. It has never left the house before. It’s raining now too and we are worried about her.”

The 300,000 baht reward reportedly drove the neighbourhood crazy, as many cash-crazed residents took to the streets to shout out the cat’s name, in a chaotic bid to find the pet and make bank.

But since her cat has been found, Mimi seems to have backed out of her pledge to give the lucky feline finder a heavy paycheck. She said there were too many people trying to contact her, and now it was most important that she, and the cat, had peace and quiet to recover from the “frightening ordeal”. She had this to say on Facebook…

“Thank you to the security guard for informing me that he’s seen her. She returned to the village herself. Thank you neighbours for opening the door for Mimi to catch her, even in the dark. Manee will have to go through a health check. We will have a blood test and health check-up before taking her back home to live with the other two cats”

As you can imagine, her post went viral on Thai social media with countless likes, comments and shares. Meanwhile, we’re left wondering — who let the cat out?