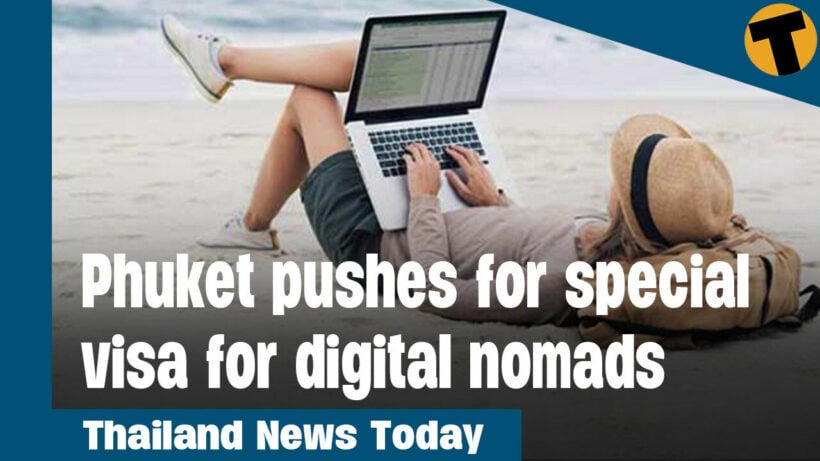 Phuket officials are pushing for a visa scheme for “digital nomads” who want to live or stay in Thailand while working remotely.

Under the proposed Phuket X Community for Digital NOMADs Visa, eligible foreigners would be offered a work permit and a stay on the island province for six months to a year. The visa scheme would also allow foreigners to open a savings account and buy health insurance.

The visa proposal was submitted to the Office of the Deputy Prime Minister and to the Foreign Affairs Minister by the President of Phuket Provincial Administrative Organisation, Rewat, The president says that many digital nomads spend a long time in a foreign country and earn a high income, adding that the foreigners could help stimulate tourism on the island and boost the economy.

He added that some nomads run their own businesses or work independently on a freelance or contract basis, like programmers, web designers, graphic designers. Some foreigners staying long term in Thailand make money through cryptocurrency trading, freelance writing and blogging, and teaching English online for companies based overseas like VIP Kid and Palfish.

The tourism industry in Phuket was hit hard during the pandemic. By offering a visa and work permit to digital nomads, Rewat says the island will no longer be so dependent on seasonal tourists. He added that more digital nomads on the island could also lead to new business opportunities, like co-working spaces, cafes, and restaurants.

Businesses, especially those in the tourism and hospitality sectors, say July 1 – the date the government hopes to declare Covid-19 endemic – is too long to wait for restrictions to be lifted.

As operators watch what’s happening in neighbouring countries, Thailand’s tourism sector is feeling anxious. According to a report, Chamnan from the Tourism Council of Thailand says July 1 is nearly 4 months away and many businesses will struggle to keep going until then. He’s calling for the Test & Go entry scheme to be ditched well before then, to give Thailand a chance to compete on the global tourism stage.

He was quoted, saying that “Thailand used to be a first mover in terms of a re-opening plan, but the country is going to face losses as it is slated to be one of the last ones to fully re-open now.”

Chamnan is calling for the government to ditch all travel restrictions by Songkran, pointing out that the tourism sector is more concerned about the economic damage of restrictions and the rise in suicides as a result. He adds that the rate of imported infections is negligible and doesn’t justify keeping strict entry conditions in place.

Meanwhile, The Thai Hotels Association agrees. THA President Marisa Sukosol Nunbhakdi says Thailand’s tourism sector will lose out to other countries if restrictions are not dropped before July 1. She too wants Test & Go dropped before then, in order to kick-start economic recovery.

Sanun from the Thai Chamber of Commerce thinks Covid should be declared endemic earlier.

Sanan points to several European countries, where, despite new infections being reported daily, travel rules have been completely relaxed, because governments understand the Omicron variant is less dangerous than previous variants. In addition, Vietnam has declared the virus endemic earlier than originally planned, in order to allow the country to open up to international tourism.

Yala’s new Betong International Airport is open for business, but you might be hard-pressed to book a flight there. Nok Air has suspended its route from Bangkok to Betong, saying it needs an additional three to four months to promote the airport among domestic and foreign tourists before it can reopen the route.

Last week, Nok Air cancelled its flights to the new airport due to a lack of passengers. The decision came just two days after its inaugural flight from Don Mueang to Betong on March 14, with PM Prayut Chan-o-cha and other government officials on board.

After Prayut officially opened the airport for commercial business, Nok Air is having second thoughts. Despite an optimistic grand opening, Nok Air’s Chief Commercial Officer Teeraporn said the drop in sales is why the airline had to cancel its Mueang-Betong flights last Wednesday and suspend the route indefinitely, adding that he wants to government to guarantee 75% of revenue for the first six months, so the airline does not suffer too much of a loss.

Unfortunately, last week’s bookings were far fewer than the airline had expected. despite receiving positive feedback from agents and customers about the new route. However, the drop in bookings reflects a drop in consumer confidence, which may have been impacted by the daily surge in Covid infections in Thailand.

Teerapon said the airline needs the next two or three months to promote Betong as a new tourist destination. He said the airline will offer flights for as little as 3,500 baht in hopes of attracting 5% of the local tourist market. After the border Thailand-Malaysia border reopens on April 1, the airline hopes to attract Malaysian tourists as well.

Thai health officials have issued a warning about a seasonal outbreak of dengue fever that may be more severe than normal.

The Department of Disease Control says that while the focus is on preventing the spread of Covid, the risk of contracting dengue tends to be forgotten about.
However, so far this year, there have been 3 early deaths from the mosquito-borne illness. DDC chief Dr. Opas Karnkawinpong says this is already half the 2021 total.

“Every year the incidence of dengue, along with that of other diseases such as diarrhoea, and heat stroke, rises sharply as summer approaches. Last year, only 6 people died because of dengue, while this year 3 dengue deaths have been reported in just the first 3 months.”

According to a Bangkok Post report, all 3 deaths were in people who were either recovering from or being treated for, Covid. Opas says that a contributing factor in the severity of their illness was the use of non-steroidal anti-inflammatory drugs.

Opas has cautioned against using such drugs like ibuprofen and high-dose aspirin to treat high fever or other flu-like symptoms, saying patients should take paracetamol instead. He adds that while most dengue fever cases are detected in children and young people, most dengue deaths are reported in the elderly population, those with underlying illnesses, and patients categorised as obese.

Opas says the first priority around homes should be to get rid of any stagnant water. This will reduce the number of mosquitos in the area and decrease the chance of being bitten and contracting dengue.

The Thai Meteorological Department has forecast “very heavy rain” for the north, central Thailand, and the east coast of the southern region.

A cyclone in the Bay of Bengal is the reason for the wet conditions, with a strong low-pressure cell in the middle intensifying and wind speeds at the centre around 30 kilometres an hour.

The cyclone is moving north-west at a speed of around 15 kilometres an hour and the department says it’s expected to make landfall in Myanmar today or tomorrow. This will lead to stronger southerly and south-easterly winds across the north, centre, east, and south of Thailand, bringing more wet conditions, with isolated heavy rain in the north and central parts, as well as along the eastern coast in the south of the country.

Fishing boats in the Andaman Sea and Gulf of Thailand are advised to proceed with caution and avoid stormy areas. Rough seas are expected, with waves up to 2 metres in height. The TMD has advised all small boats in the Andaman region to remain ashore today and tomorrow.

Faraday
Post containing Foreign Language & the reply to it removed. Moderator
Artemis080
The point of this visa is not to enable people to live in Phuket long term. It's a medium-term visa option for under a year and mimics other "work remotely" programs around the world. I support that. I'm actually not…
LoongFred
11 hours ago, JamesR said: Those of us who are so called digital nomads will not tell the Thais we are writing software and selling it while in our houses in Thailand, plus people like me who are over 50…

Bluesofa
23 minutes ago, Artemis080 said: A YouTuber commercially vlogging here does need a WP because they are making a living from the direct association of being in Thailand. A person coding on a laptop for a foreign company with no…
Artemis080
20 minutes ago, Bluesofa said: Saying that working in Thailand for a company abroad doesn't need a work permit. Do you have a link to immigration or the ministry of labour to confirm this? IIRC immigration define 'work' as something…