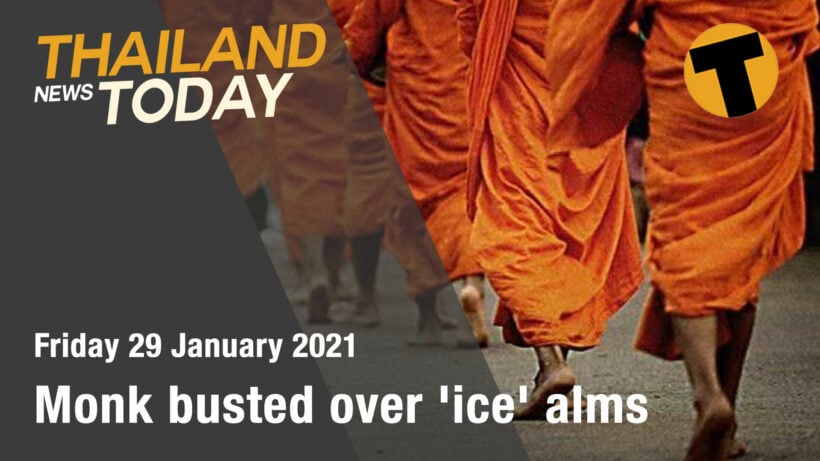 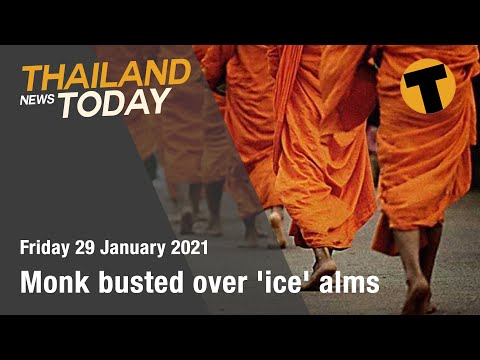 Police arrested a 45 year old Buddhist monk for allegedly getting high on methamphetamine at a temple in the north eastern province of Buriram. The monk allegedly told police that a follower gave him the drugs as a merit gift and convinced him to take it.

Local police say they received a complaint from the Baan Kok Mueng temple’s abbot claiming that a monk at the temple was acting suspiciously and that the monk could be involved in illegal activities.

Police investigated the claims and had the monk do a drug test. The monk tested positive for drugs and was then forced to the leave the monkhood.

His explanation to police was that a follower had offered him the drugs, as well as the equipment to take the drugs, as a merit gift.

But the man had a history of drug use and apparently became a monk to start a new life. He had been arrested in the past for allegedly possessing 15 methamphetamine pills.

A 59 year old teacher and owner of a tutoring centre in Chon Buri’s Bang Saen district has been arrested for allegedly sexually abusing a 15 year old student.

Police say the sexual abuse was caught on camera. In a video obtained by police, the teacher was seen touching the student’s breasts along with other sexually explicit approaches while she was playing on her phone. Thai media posted screenshots of the video clearly showing the misconduct.

The teacher was arrested on charges of committing an indecent act on a person over 15 years of age. Police say the man admitted to the charges.

The name of the school has not been released due to the ongoing investigation.

Without much other good news on the horizon, Pattaya officials have celebrated almost two weeks of no new Covid-19 infections with a celebratory ‘scrub down’ of the infamous Walking Street. The ritual ‘wetting’, in the Songkran tradition, was seen as a new beginning, washing away the bad spirits and the bad times that has fallen on the once-busy red light district.

Pattaya’s Mayor, along with a platoon of city officials, local business owners and city workers, scrubbed the grotty pavements with plenty of suds for the camera as part of a wider make-over for the street that was proposed a year ago.

The ‘new beginning’ coincided with some good news for the battered tourist city.

Massage shops and spas, Tattoo studios and beauty clinics are now allowed to reopen. Gyms, pools, fitness centres, saunas and massage shops offering “soapies” were not included in the order.

Most Thai residents and tourism operators want the country to reopen borders to international tourists, as long as a 14 day quarantine still in place… this according to the Tourism Council of Thailand survey.

785 operators in tourism-related business and 1,444 Thais were surveyed. 60% of surveyed locals and 50% of tourism operators agree with the idea to reopen the borders as long as the 14 day quarantine stays in place.

60% of tourism operators say foreign visitors should enter on the Special Tourist Visa and undergo a 14 day quarantine in closed areas with the opportunity to do recreational activities.

Some 53% of operators say Thailand should welcome independent tourists from low risk countries while also requiring them to undergo a mandatory 10 to 14 day quarantine.

Packages of crystal methamphetamine worth around 51 million baht were found washed up on Koh Samui’s Hat Koh Taen beach yesterday. Police suspect the drugs are from a vessel which sank off the coast of Vietnam while carrying a large shipment of drugs.

In all cases, the packages were tightly wrapped in 3 layers with pictures of carps and Chinese characters.

802 new Covid-19 cases were announced to the media today during the CCSA daily briefing.

Most of the cases were found through active contact tracing, which was rolled out in Samut Sakhon, the epicentre of the latest wave of infections. The province has set up various field hospitals to treat the patients and to contain the virus.