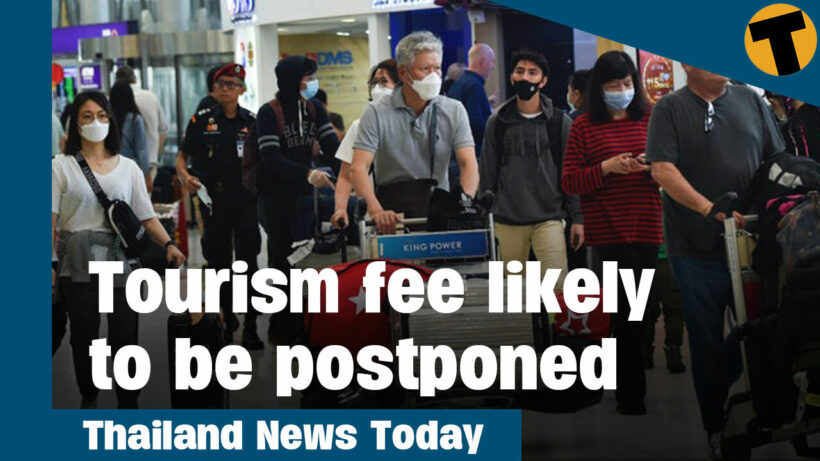 A 300-baht tourism fee which was set to be introduced from April 1 now looks likely to be postponed.

Implementation is expected to be pushed out by around 2 months, although tourism operators have said they’d like to see the idea ditched completely, at least while the sector is fighting to survive the pandemic.

However, Thailand’s tourism minister, Pipat Ratchakitprakarn, says the National Tourism Policy Committee supports the creation of a tourism fund, paid for by the new fee, and the next step would be proposing it to the cabinet. Once it receives cabinet approval, details of how it will be collected will be published in the Royal Gazette within 90 days. However, implementation of the fee is being delayed as airlines are likely to be charged with collecting it and they’ve asked for more time to prepare. Collection methods for arrivals at land borders have also not been finalized.

Around 20% of the fee will be allocated as insurance coverage for international visitors, while 50% will be used to develop tourism offerings in the kingdom. Yuthasak Supasorn from the Tourism Authority of Thailand says the country’s tourism products and services still need a lot of investment, in particular local products and festivals.

Yuthasak says the support of the creative arts and other cultural attractions, such as food, festivals, film, fashion, Muay Thai, music, and museums, could increase tourism revenue by 20%.

Apisit Laistrooglai from the Creative Economy Agency says the value of Thailand’s creative industries is expected to reach 1.5 trillion baht. He points to festivals such as Bangkok’s Design Week, which takes place this month and is expected to generate 750 million baht.

Sandhu, who was born in India, was a notorious gangster in Canada and was deported for “serious criminality.” He entered Thailand last month by private jet and was found dead with more than 20 bullet wounds outside a villa in Rawai last week.

The two suspects were spotted on CCTV footage by the Rawai villa wearing white hoodies. Now, police say they have footage from the Bangkok airport showing the two suspects. Reports say the men were traveling separately on different flights, but both left the country the night of February 6.

It’s unclear how the men traveled from Phuket to Bangkok, but they arrived at the Suvarnabhumi Airport by taxi and departed on different flights. Reports on their destinations are inconsistent. Some Thai media reports say both of the men booked flights to Canada, while others say they traveled to countries in Europe.

Police, who have not identified the suspects to the media as the investigation is ongoing, says the men entered Thailand on December 18. Reports say the suspects are believed to be Canadian citizens.

Residents of Thailand can now travel to 60 countries, including 27 EU nations, where the Mor Prom Digital Health Pass is accepted.

Public Health Minister Anutin Charnvirakul confirmed the development at a media briefing. The Thailand Digital Health Pass has been accorded the same recognition as the EU’s Digital Covid Certificate since December.

Anutin says residents can now use the health pass to travel to the 60 countries that have signed up to the EU DCC system. The certificate will enable them to partake in activities, such as attending sporting fixtures or gaining entry to restaurants, that require a vaccine pass. Through the Thailand Digital Health Pass, the authorities in other countries will be able to check the vaccination status or recovery status of Thai residents.

Mutual recognition also means that the Thai government can check the Covid status of visitors carrying the EU DCC. Officials, as well as businesses in Thailand, can scan the digital certificate’s QR code to check tourists’ vaccination or Covid status.

Dr. Kiartphum Wongrajit from the Public Health Ministry says the first part of Thailand’s Digital Health Pass contains information such as the bearer’s name, age, passport or ID number, and nationality. The second part will confirm if they’ve been vaccinated, tested, or recovered. The information on vaccination and recovery status will remain available for 180 days, while the testing information expires in 7 days.

The Thaiger notes that a number of people have reported that the Mor Chana app does not work outside Thailand. Therefore, if planning a trip, we recommend carrying hard copies of Covid vaccination or recovery certificates.

Officials in Rayong are once again dealing with an oil leak from an undersea pipeline belonging to Star Petroleum.

According to the Pollution Control Department, the oil slick has been spotted in the Map Ta Phut sea. Department boss Uthapon says Star Petroleum has confirmed that around 5,000 litres of oil have created the slick, which extends for about 5 kilometres from a single point mooring.

According to a Nation Thailand report, the company, which had been adjusting a section of the pipeline, is investigating the cause of the leak. According to Star Petroleum’s statement to the governor, the leak is classified as Tier 1, meaning it doesn’t exceed 20 tonnes.

Currently, a damage control team is at the site of the leak and is expected to receive assistance from Royal Thai Navy vessels and aircraft. Star Petroleum’s statement has described the slick as silver but has not provided any further information on the type of oil, the severity of the leak, or how it might be dealt with. The provincial governor has called an urgent meeting with Rayong officials and local government agencies in order to deal with the leak.

Students in Thailand are welcoming moves from the government to promote safe sex and the use of contraceptives. However, many say the country is still lacking in proper sex education.

Earlier this month, the National Health Security Office handed out birth control plans and in April they plan to give away free condoms to people 15 years old and above in an effort to prevent teen pregnancies as well as the spread of STDs.

An 18-year-old student from a high school in the Isaan province Nakhon Ratchasima told reporters, quote.
“It doesn’t matter if we have free condoms or birth control pills if people do not have proper sexual knowledge. Sooner or later, we will face the same problems of unwanted sex, unplanned pregnancies, and sexually transmitted diseases.”

Another high school student said she learned about sex education from social media platforms like TikTok, Facebook, and Twitter. She explained that a pharmacist who goes by “Doctor Noo” on TikTok does videos on how to use condoms, when to take birth control pills, and how to track a menstrual cycle.

A plate of Thailand’s popular meal, pad kra prao, was tied to a high altitude balloon, sending it 30 kilometres up into the sky for a space experiment by Thailand’s Space Development Agency.

To mark Thailand’s first space experiment using a high-altitude balloon, a large plate of pad kra prao was sent up as well. Pad kra prao, one of Thailand’s staple dishes, is stir-fried meat with basil leaves and chili served with rice and a fried egg. The launch also kicked off the High-Altitude Experiment Platform nature study center in the central province Nakhon Sawan.

According to the head of the National Space Exploration project, the experiment was aimed to explore the effects of high altitudes on nutrients. Will the pad kra prao be edible in space? Will any of the nutrients be destroyed or will they improve? Will Martians find it too spicy? Thai scientists are waiting for the answers.

With Thai food growing more popular worldwide, it is likely that it will be created as a meal in space. Pad kra prao was picked for the research because of its wide appeal, simplicity, and low cost.

High-altitude balloons can be used to explore the effects of near space on other ingredients, potentially leading to farming in space.

harry1
why dont the powers that be,just top on the taxi fare,them everyone can get their cut from the taxi drivers,job done
vlad
And that Gent's sums up the Thai Government. One day their visitor numbers have shown to be Sluggish ie no one is coming. On the same day another minister ignores what Tourism chiefs are telling them and they're insisting on…