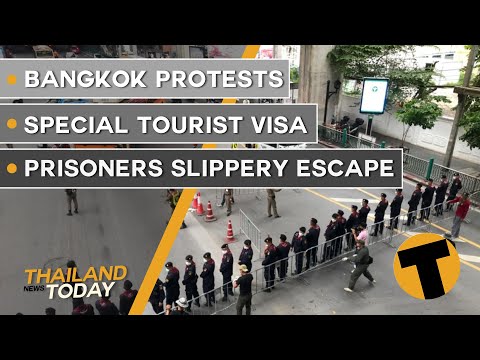 A passenger train collided with a car, killing a woman and injuring 2 others at a railway crossing in Phetchaburi’s Khao Yai district last night.

At last night’s incident, police found the Toyota Vios crushed against beams under a bridge, still under construction. A 21 year old was found dead in the car. The 39 year old driver and a 33 year old passenger were OK but trapped inside the wreckage.

They were finally rescued and sent to hospital.

Police are investigating to determine the cause of the incident, but say the crossing was unguarded.

Just earlier this week, a freight train smashed into a charter bus, killing 18 bus passengers and injuring another 44 at a crossing in Chachoengsao, just east of Bangkok.

Police have closed Bangkok’s Ratchaprasong Intersection and Ratchadamri Roads from now, just hours before the next round of anti-government protests were scheduled to begin at 5pm. Ratchadamri Road is being closed all the way to the Pratunam intersection. The closure, on a Friday afternoon, provides the city an additional traffic headache.

Early yesterday morning a State of Emergency was enacted giving police special powers to arrest gatherings of more than 5 and clear “areas” at their discretion. The new edict also gives authorities the power to shut down dissenting media and arrest people making comments “that could affect national security”.

Police allowed a gathering to assemble last night after it was apparent the numbers were swelling way beyond expectations, mostly made up of school and university students, that reached 15,000+

Meanwhile, contractors who provided PA and sound services for last night’s gathering in Bangkok’s shopping district, have been arrested. Thai Lawyers for Human Rights report that 6 of the crew have been formerly arrested.

There will no doubt be some sort of confrontation this evening, or an attempt to move the protest site. We’ll keep you up to date with all the latest information at thethaiger.com

After the meeting the Thai PM told the media that a curfew banning people from leaving home at night might have to be imposed if the situation escalated. He insisted the situation did not warrant the declaration of martial law.

In the latest Special Tourist Visa news, it looks like there could be a flight of successful applicants coming next Tuesday. But we’ll get more excited when the plane actually arrives.

After much confusion and a few apparent ‘misunderstandings’, Chinese tourists on the Special Tourist Visa will actually arrive on October 20 and 26. The announcement from the Tourism and Sports Minister and reported in the Bangkok Post. The first group is said to arrive in Bangkok.

Since the Special Tourist Visa was enacted not a single passenger has arrived on Thai soil as a result of applying for the new visa which entitles applicants to 90 day stays, kick started by a 14 day quarantine period. The 90 days can be renewed twice.

2 Turkish inmates escaped from a Thailand prison in a daring, if not slippery, escape.

Their main tool? Soap. They used soap to cover the bars of their cell in the Tak’s Mae Sot district. Over time, the soap caused the metal to rust and they were able to break the cell bars. Apparently, this isn’t their first cunning escape to ‘slip’ away from prison.

The 41 and 29 year olds were arrested on charges of entering Thailand illegally and were first incarcerated at the Nong Khai Immigration Police Prison near the Thai-Laos border. The men escaped the prison earlier this year and were missing for 21 days.

They were found and sent to a prison in Mae Sot. There they crafted their cunning escape. At this stage they’re on the loose and police suspect they will try and slip over the nearby Burmese border.