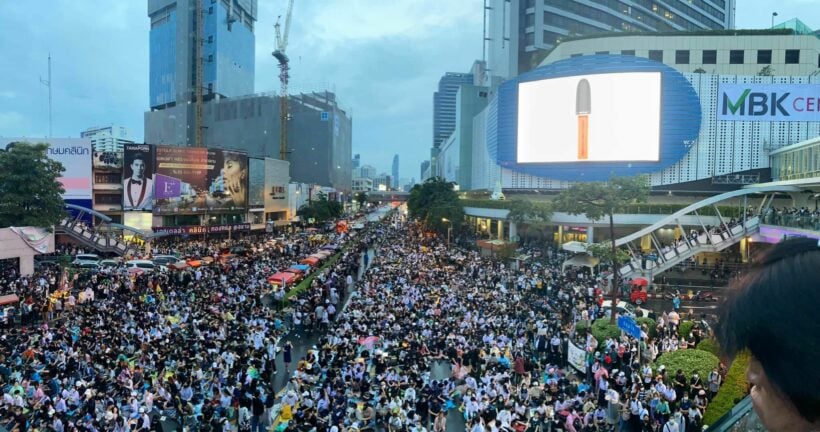 In the latest cat and mouse game between police and protesters, the students waited for Bangkok police to close down the Ratchaprasong intersection, the site of last evening’s rally, and then scheduled tonight’s rally at the nearby Pathumwan intersection instead, one of the busiest intersection in the city. The posted the switch of location at 4pm, after police had sealed off the intersection 800 metres away. The huge MBK media mall overlooks the intersection.

Already, as of 6.30pm, more than 10,000 people have gathered there in defiance of the State of Emergency announced by the government yesterday.

Once on location the protesters asked people using the skywalk overlooking the intersection to “Come on down” and join them. The National Stadium Skytrain station has been closed.

The new location was announced on the Free Youth Facebook page around 4pm this afternoon.

The protesters have been warned not to assemble as it would contravene the current State of Emergency announced early yesterday morning and endorsed by the Thai cabinet this afternoon. The PM has also warned protesters that he would announce a curfew if the protests didn’t stop organising the gatherings.

But for now the protesters have decided to push ahead with peaceful assemblies and continue their demands for the prime minister to resign, along with constitutional and parliamentary reforms. They’re also demanding that their fellow protesters are released from detention after up to 30 people, associated with the protests, have now been arrested.

Police have also repeated their warnings that people attending the rally will be arrested if they take part. The current State of Emergency prevents gatherings of more than 5 people.

The city’s premier shopping centres of Siam Paragon and Siam Discovery Centre, right next to the Pathumwan intersection, about 800 metres away on Ploenchit Road, closed mid afternoon because of the closure of the Ratchprason intersection.

Bangkok in “State of Emergency” for 1 month, PM warns about possible curfew