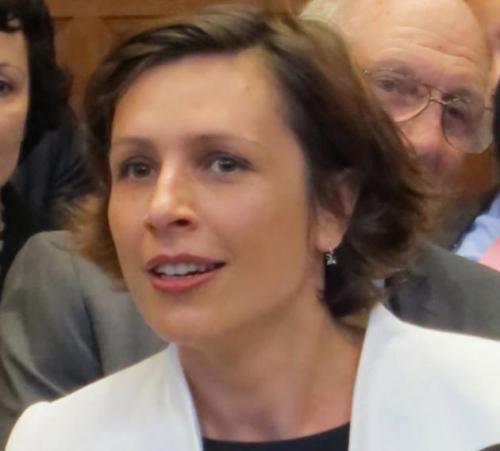 PHUKET: Alina Miron, co-counsel on the Thai legal team that is presenting the country’s case in the Preah Vihear land dispute before the world court, smiled in surprise when told she had become a celebrity in Thailand.

Her strong presentation and photogenic appearance on the court’s TV screens have left many people following the case impressed. Also, many are curious about Miron and how she came to be a member of the Thai team.

Thailand’s agent in the case, Virachai Plasai, said that Wednesday’s appearance was Miron’s first before the world court, and that she did a great job of explaining Thailand’s position on the maps Cambodia is using to make its case.

“I trust her when it comes to presenting this important topic to the court, and she did an impressive job,” he said.

In the world court case, Miron is serving as assistant to the team’s lead counsel, Prof Alain Pellet. She has worked with Pellet on many cases, advocating on behalf of Slovenia, Russia, Greece and Nicaragua.

Miron speaks many languages. Romanian is her mother tongue, but she also speaks French and English fluently. Her command of Italian is also good.

Thai social media have been gripped by the “Alina Miron fever”. Bloggers, along with Thai senators attending the trial at The Hague in the Netherlands, have praised Miron for her sound reasoning, which they believe will convince the world that Cambodia does not have the right to a 4.6-square-kilometre disputed area near the temple.

Appointed Senator Somchai Sawaengkarn posted a message on Facebook praising Miron’s politeness and her technique of reasoning. He said her use of pictures and maps to make comparisons have made Thailand confident of winning the case. “[Another senator] could not help but compliment her, telling her in person that she was ‘excellent’,” Somchai said.

Senator Kamnoon Sithisamarn said Miron demolished Cambodia’s argument, which is based on the Annex I map, dismissing it and turning the courtroom’s attention to maps introduced by Thailand in the 1962 case.

A blogger called “Sai Trong Paksanam” said Miron pointed out credible and technical problems with Cambodia’s Annex I map, saying it has been altered and contradicted geographically. Miron said the Thai team has found there are six different versions of the Annex I map.

Sermsuk Kasitipradit, a Thai PBS reporter, posted pictures of Miron and a message on his Facebook page and received 700 “likes”.

“Miron fever” also gripped the Pantip website, thanks to blogger “BaaD” with his blog “Netizens praise Miron after her taking to pieces Cambodia’s Annex I map”.

On Twitter, @SupotNTV wrote that Miron was brave in making her observations, saying that “Cambodia’s map is not accurate but I could not believe that the country has altered the map.” Within 18 hours, this message was re-tweeted 232 times. @doubletoyy tweeted that though Miron is not Thai, she carried out her duty better than Thai officials. She posted pictures of Miron on pic.twitter.com/DhCi9ewIOK.

Noppadon Pattama dismissed any suggestion that the governments signed papers endorsing the use of the controversial map, which was largely blamed for Thailand’s loss of the Preah Vihear Temple in 1962.

The map is in the spotlight again as the ICJ is holding hearings on Cambodia’s request for the court to interpret its 1962 judgement. That judgement held that the ancient temple sits on Cambodian soil, but the status of the land in its vicinity was left unclear.

Noppadon yesterday maintained that a joint statement signed by the People Power Party-led government and Cambodia was made to protect Thailand’s rights over the disputed area. “The members of Thailand’s legal team are also involved in preparing that joint statement,” he said.

Noppadon was referring to Virachai Plasai, the Thai ambassador to The Netherlands, and French lawyer Prof Alain Pellet. He also pointed out that because of that statement, Cambodia saw only the Preah Vihear Temple inscribed as a World Heritage site; the disputed area was not included.

PHUKET: The question raised by Judge Abdulqawi Ahmed Yusuf after Wednesday’s International Court of Justice (ICJ) hearing on the “vicinity” of Preah Vihear Temple reflected a personal interest of the judge, but sent no significant signals regarding the case, Foreign Minister Surapong Towichukchaikul said.

The judge asked Thailand and Cambodia to define the vicinity of Preah Vihear on maps or graphics of the area and show it to the court.

The court required a reply in written form from both sides by April 26, and the parties would have to submit responses to each other’s definitions by May 3.

Some observers said the judge’s question sent a signal that the court was willing to address the issue of the status of the temple’s vicinity, and showed an inclination to accept the case for interpretation as requested by Cambodia.

Surapong said he asked Judge Yusuf in person during a reception party after the hearing on Wednesday about the significance and implications of the question.

The question reflected the personal interest of Judge Yusuf, not of the court’s panel, but the judge would circulate the replies from both sides to the other 16 members of the court, Surapong said.

Thai agent Virachai Plasai said it was unusual for a judge to raise a question after a hearing session had ended, and to request answers in written form. Previously, the court or judges would ask questions during the hearing session and demand an immediate answer. “But we should not panic over the judge’s question. It implies nothing for the whole case,” Virachai told reporters.

Thailand and Cambodia are in conflict over their interpretation of the 1962 judgement by the ICJ that Preah Vihear Temple is situated in territory under the sovereignty of Cambodia. Under the judgement, Thailand was ordere