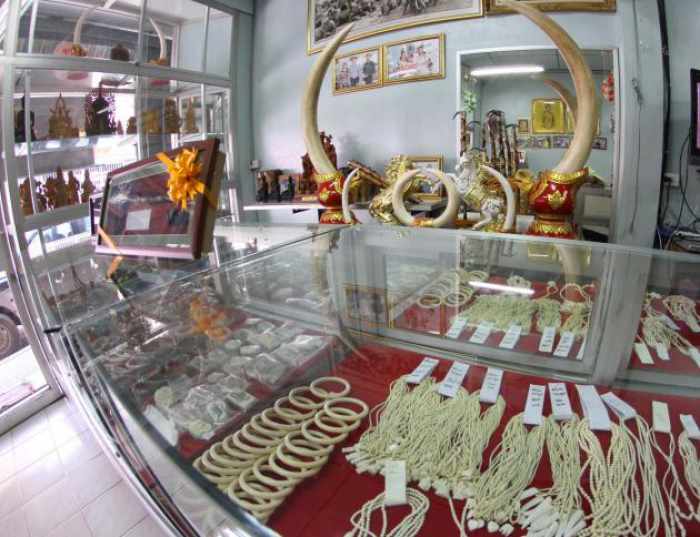 PHUKET: Despite Thailand’s professed reverence for elephants, the country has failed to rein in the illegal ivory trade.

Partly to blame for the current poaching crisis is Thai domestic legislation. It permits trade in ivory from domesticated Asian elephants but provides no effective mechanism or legal framework for the internal regulation of this market, according to the wildlife trade monitoring network TRAFFIC.

“Because visually, you cannot tell the difference between African and Asian ivory, once the African ivory reaches the market place in Thailand, it is sold as domesticated elephant ivory,” Vietnam-based Greater Mekong Region coordinator for TRAFFIC Naomi Doak, said yesterday. She lamented that the presence of ivory in Thailand, as a result, had increased at a “horrific” pace.

According to latest surveys, the number of shops selling ivory products has burgeoned to double the number of the previous year – from 61 ivory sellers in January 2013 to 120 in May 2014. Ivory products have also increased almost three fold – from 5,715 items to 13,237. The products accounted for were only those visible in shop fronts and did not include those hidden behind as stock.

“Each one of these represents the death of an elephant,” Doak said.

The situation in Thailand is particularly complicated because the Kingdom has domesticated elephants that produce ivory, meaning they can legally be sold on the domestic market. This ivory is illegal outside Thailand.

Doak suggested that the amount of ivory products available in Thailand appeared greater than what domesticated pachyderms would be able to provide.

In 2012, Thailand had 4,169 registered domesticated elephants. Just over 30 per cent were male. This means at most, there were 1,237 registered male elephants able to provide ivory for the domestic market. Some male pachyderms, after all, are tuskless.

Under Thai law, all shops selling ivory are required to register with the Ministry of Commerce, regardless of its size. However, many of these shops have not been registered.

Doak recommended that Thailand strictly adhere to the Convention on Trade in Endangered Species of Wild Fauna and Flora resolutions.

Thailand has recorded seven of the largest ivory seizures worldwide since 2009, totalling 9.1 tonnes of ivory. Another consignment, weighing 532 kg, was destined for Thailand but was seized at the point of export in Kenya.

Statistics show that on average, five elephants are killed per hour globally.