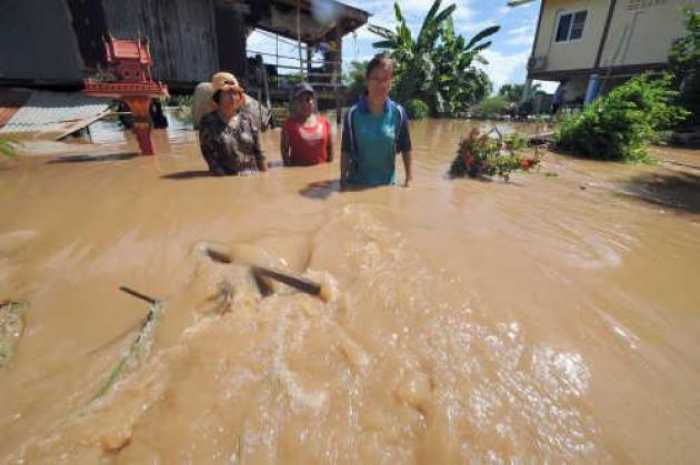 Meanwhile, ML Sukhumbhand Paribatra, who resumed as Bangkok governor after the Court of Election Appeals dismissed an election fraud charge against him, yesterday checked progress of the city’s flood-prevention measures.

In Sukhothai, which has five districts declared as flood disaster zones, the situation remained critical yesterday, especially in Sri Samrong and Muang districts. The Yom River, taking in northern run-off at 1,400 cubic metres per second, continued to rise, while a 100-metre section of a flood wall in tambon Pak Kwae in Muang district broke and many areas of this tambon were under two-metres of water. Troops on flat-bottom boats helped evacuate residents at risk in Sri Samrong to safer ground.

The situation looked unlikely to improve this weekend, as the Meteorological Department said a strong monsoon trough covering the upper part of Thailand would remain there.

Disaster Prevention and Mitigation Department chief Chatchai Phromloet said that the state had put flood-mitigation measures in place and he was confident the disastrous floods of 2010 would not be repeated this year.

Farmer Phang Khunwan, 51, whose rice crop was not yet ripe, said he harvested the paddy out of fear that all would be lost.

In Phachi and Uthai districts, villagers lamented that off-season rice paddy in flood-hit fields would be ruined if the situation didn’t improve within five days.

Strong torrents destroyed a bridge, a spillway and brought down several power poles, which led to a blackout in six villages in tambon Nam Mhan. This prompted residents to prepare to evacuate, as it brought back memories of a flood in 2006 when the area was also hit by a landslide.

Up North, residents and business owners in Chiang Rai’s Mae Sai district moved belongings to higher ground after parts of the Thai-Myanmar border, especially the Tambon Mae Sai municipality, was hit by a 30cm flood. A flash flood also caused inundation in many parts of Muang district.

In Bangkok, BMA Department of Drainage and Sewerage director Adisak Khantee reported to Sukhumbhand that the city would have heavy rain in several areas over the weekend, while seasonal seawater inflows were expected at the end of the month.

Adisak said the city had prepared to handle the situation with 166 water pump stations, 217 sluice gates, and seven drainage tunnels.

He said city workers had cleared almost 100 per cent of waterways and sewage pipes. A total of 520 water pumps were installed at flood-prone spots, while staff at relevant facilities were on alert.

Sukhumbhand said the situation was not worrisome because the Bhumibol, Sirikit and Pa Sak Jolasid dams were still at 30-40 per cent capacity. However, he urged Adisak’s office to monitor the rainfall in order to handle any flooding in a timely manner. He said the city, being more equipped than the Highway Department and the Rural Roads Department, had received the National Council for Peace and Order’s permission to handle Bangkok’s flood-hit roads.

Sukhumbhand later inspected the Bang Sue tunnel, which is under construction and slated for completion in September 2016. He said the Bt2.4 billion, 5.4m-wide tunnel, which can drain water into the Chao Phraya River at 60 cubic metres per second, would help prevent flooding in Chatuchak, Bang Sue, Huai Khwang, Ratchathewi, Phaya Thai and Lat Phrao.

The Royal Irrigation Department urged residents in low-lying areas near the Chao Phraya who are outside flood barriers, to brace for flooding due to rising water levels.