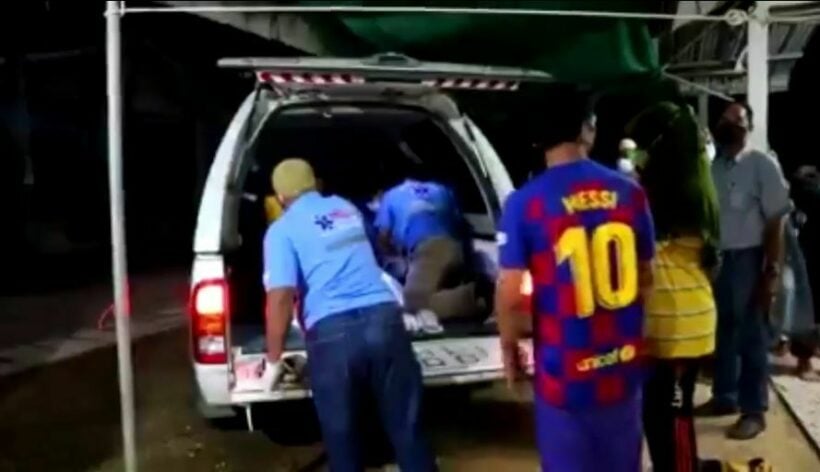 A Phang Nga Community College student who developed blood clots after receiving her second Covid-19 vaccine shot has died of a haemorrhagic stroke following brain surgery. As reported by the Bangkok Post, the student, 20 year old Ketsiree Kongkaew, who had had her left leg amputated, died on Monday morning at Songklanagarind Hospital in Hat Yai.

Having first received the Sinovac vaccine, Ketsiree was reported to have suffered a blockage of a limb artery after receiving the AstraZeneca vaccine as her second shot. Complaining of a fever and chest pains around three days after receiving the shot, she was initially diagnosed with a bladder infection by a doctor at Phangnga Hospital.

After experiencing severe pain in her left leg, she was subsequently referred to Surat Thani Hospital, with an X-ray revealing blood clots requiring urgent surgery. With her condition continuing to worsen, she was first transferred to Krabi Hospital, then Songklanagarind Hospital, where the decision was made to amputate her leg.

Songklanagarind Hospital had received permission from her relatives to perform surgery, with a doctor advising that she had experienced bleeding in her brain. Ketsiree – who remained unconscious following the operation, and who was reliant on a ventilator – was pronounced dead on Monday after suffering the stroke. According to the report, doctors said the haemorrhage was a side effect of drugs used to treat clots.

The Bangkok Post has reported that the National Health Security Office has provided Ketsiree’s family 400,000 baht in financial assistance.

The World Health Organisation notes via its website that the risk of blood clots is far higher from Covid-19 itself than from the AstraZeneca vaccine. With the vaccine, the WHO advises that as of July 15, 2021, data shows that these symptoms occur in about four to six people out of every million vaccinated (varying based on age, sex and geographical location).

Benroon
3 hours ago, yetanother said: "an X-ray revealing blood clots requiring urgent surgery. With her condition continuing to worsen, she was first transferred to Krabi Hospital, then Songklanagarind Hospital, where the decision was made to amputate her leg." horrible story;…

Soidog
27 minutes ago, MrNovax said: 25 million people that we know of..... which means this is probably a small fraction of those who either had 19 or had natural immunity to begin with.  which means the % of people dying…

Benroon
30 minutes ago, MrNovax said: Giving anyone in their 20's or 30's any of these vax is gross negligence  Feel free to avail us of your virology qualifications - preferably ones that fly in the face of 99.9% of the…

Soidog
7 minutes ago, Benroon said: it was never designed to stop you getting covid. Hope that helps Spot on. Amazing how people still don’t understand how the vaccines operate after almost  a year of them being around !

Andrew Reeve
Several posts are now in breach of rule 5 and this thread is now closed   Understand that the Forum considers “Facts” to differ from a “Personal Opinion.” Facts may be inferred or quoted. Members are responsible to make sure…