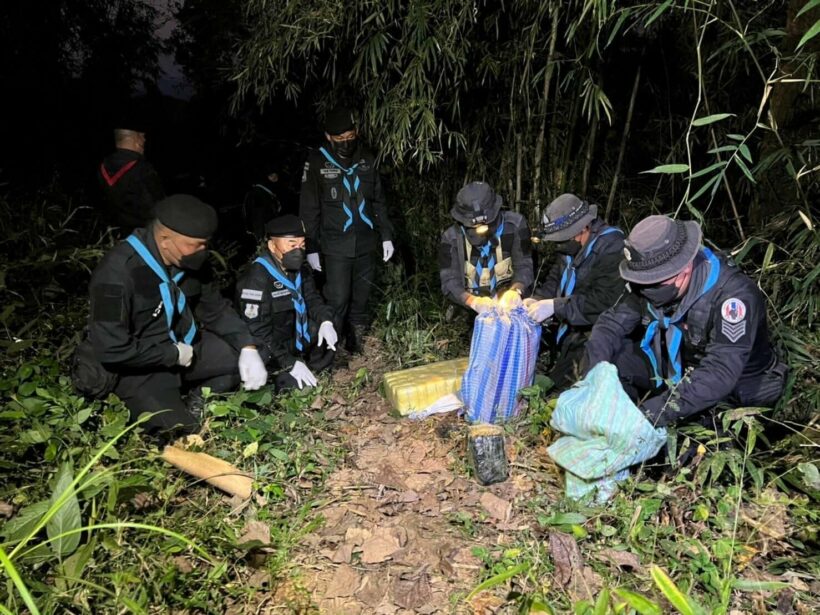 Three armed men in Chiang Mai near the Myanmar border opened fire on Thai soldiers on Wednesday night. The soldiers shot back, and after five minutes of shooting between the two sides, the gunmen ran into the jungle. The soldiers then searched the area and found 200,000 methamphetamine pills and 750 grams of heroin. The methamphetamine pills were wrapped in several packages, and the heroin was spread into 30 drink bottles.

The soldiers turned the drugs in to Mai Ai police. The patrol leader of the soldiers had tried calling for the gunmen to lay down their weapons, but, according to officials, they refused to and started firing at soldiers. The suspects are still at large.

Drug smuggling has been a longstanding problem in Thailand’s border regions, especially along the Mekong River and by the Golden Triangle, where Myanmar, Thailand, and Laos meet. Last week, the navy seized 20 million baht worth of cannabis in Nakhon Phanom, which borders Laos. Thailand’s navy now plans to up its presence on the Northern border to fight smugglers.

One commander said many smugglers are transitioning to bringing drugs, especially marijuana, to Thailand in small amounts, with many travelling across the Mekong River in long-tail boats. He also said now that cannabis has been taken off Thailand’s narcotics list, smugglers might try to use legal loopholes. He said authorities will now keep an especially close watch on the situation.

This past June, a major drug smuggling incident also happened in Kalasin, another Northeastern town. Police caught an alleged drug trafficker with 300 kilograms of compressed marijuana.

steve860
26 minutes ago, Thaiger said: Three armed men in Chiang Mai near the Myanmar border opened fire on Thai soldiers on Wednesday night. The soldiers shot back, and after five minutes of shooting between the two sides, the gunmen ran…