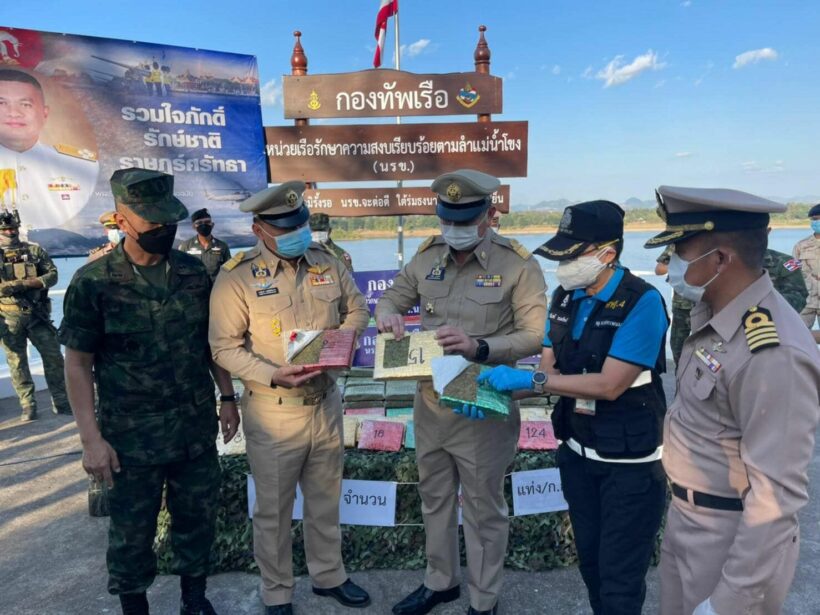 A navy patrol seized 448 kilograms of cannabis in Nakhon Phanom yesterday, said a Mekong Riverine Unit commander. The commander, Sombat Juthanom, said the drugs were worth roughly 10 million baht. Since the beginning of the year, authorities have seized roughly 10 tonnes of marijuana in Thailand’s Northeast region. In addition, the commander reported being concerned about methamphetamine and heroin being smuggled into Thailand across the Northeastern border.

Commander Sombat’s unit plans to increase its presence on Thailand’s Northeastern Border to catch drug smugglers entering Thailand. Ten tons of marijuana have been intercepted this year. The commander said many smugglers are transitioning to bringing drugs, especially marijuana, to Thailand in small amounts, with many travelling across the Mekong River in long-tail boats.

With cannabis taken off Thailand’s narcotics list, Commander Sombat said authorities would monitor the situation especially closely, as smugglers may use legal loopholes. He also said they would enforce stricter measures to stop the drug influx. Though cannabis with low THC content is no longer on the country’s narcotics list, the THC-rich bubs remain on the list and illegal.

Jason
I am always glad to see drugs off the streets. But the medicinal use of cannabis is a good thing. There is a balance in there....somewhere.....