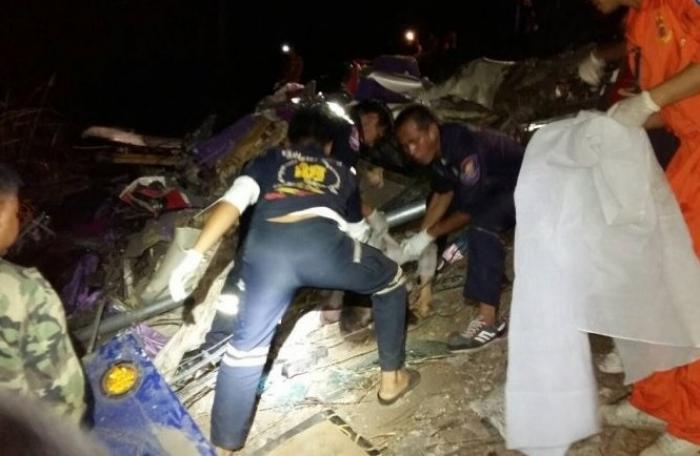 PRACHIN BURI: Budget constraints may have contributed to the deaths of four teachers and two students who were killed yesterday when a double-decker bus on a school trip plunged into a ravine in Prachin Buri’s Na Di district.

The accident took place on Highway 304 on the route from Nakhon Ratchasima to Na Di. The two-lane road, which is known to be dangerous, is steep and curvy along a 12-kilometer stretch.

An initial investigation of the scene revealed that a burning smell had spread in the bus just before it went out of control, hit another car, several electricity poles and a road barrier, before plunging about 20 meters into the ravine with more than 50 students and teachers on board.

Nikorn Chamnong, the president of the Thai Safety Association, said in a statement:

“The Education Ministry and relevant authorities should urgently investigate this latest accident. Also, they must take measures to prevent such problems from recurring. Last year, so many road accidents occurred during educational trips, killing 195 victims,” Mr Nikorn said.

“It should be noted that each academic semester, the budget for students’ educational trips is only 291 baht (approx US$8.50) per head,” the report said.

Budget constraints have made it difficult for schools to get quality bus services, and in some cases buses have lacked proper insurance and the drivers were not even familiar with routes.

Double-decker buses, normally used on city streets only, were chosen for long-haul, highway use to save money because they can take many more passengers with a single driver.

Student mother Patcharaporn Janpitak, 38, of Khon Kaen province sobbed when she learned that her only son, Kittipong Wongwai, died in yesterday’s accident.

The bus had left their home province of Khon Kaen at 9pm on Wednesday night, bound for Chantaburi.

“He spoke strangely before he left. He said something like he would not be able to come back and asked his younger sister to take good care of me,” Ms Patcharaporn said.