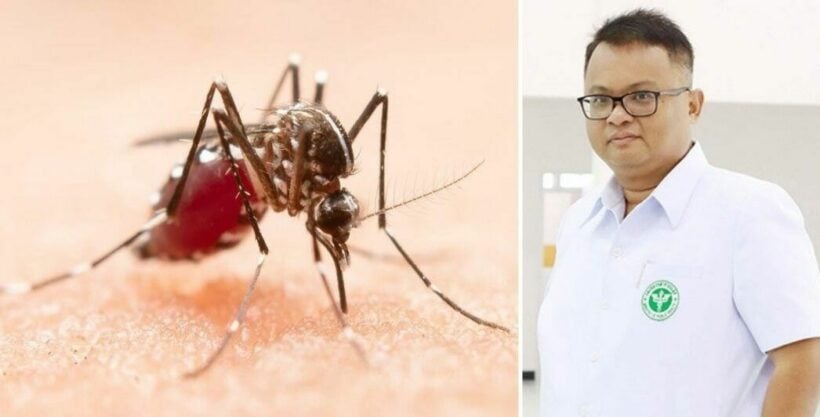 The risk of contracting dengue fever in Thailand is higher in the rainy season, because pools of water are breeding grounds for mosquitoes, warns Songkhla Provincial Public Health Doctor Songkran Maechum. Monsoon season began last Friday, and intermittent rain is expected to cause a spike in dengue fever cases in Thailand, so be prepared.

In Songkhla province in southern Thailand, 32 cases of dengue fever were reported from January 1 – May 10 this year. No deaths were reported. The most common age group to catch dengue were 10 – 14 year olds followed by 14 – 24 year olds. Cases were recorded in Krasae Sin, Sadao, Hat Yai, Mueang and Saba Yoi districts.

Dengue fever is caused by bites from Aedes Aegypti mosquitos (the black and white striped ones) infected with the dengue virus. The virus incubates inside the mosquito for 8 – 10 days and is stored in the mosquito’s salivary glands. When an infected mosquito bites someone, it will release the infection and make the person sick. Symptoms can range from mild to very severe and can even result in death.

Symptoms include a fever for 2 – 7 days, headache, body ache, rash and small red spots on the body, arms and legs. Symptoms are often accompanied by nausea, vomiting, abdominal pain and loss of appetite. If symptoms are serious, the infected person should seek treatment at the hospital.

The doctor’s slogan for preventing dengue fever is…

“Don’t let mosquitoes bite you, and don’t let them breed.”

To read the Thaiger’s guide on how to avoid dengue fever, click here.

It is also important to exterminate mosquito breeding grounds, to reduce the overall population of mosquitoes which have the potential to carry the dengue virus. The doctor says every household should have a proper waste management system and regularly dispose of rubbish. Any containers of stagnant water from in or around your home should also be removed, because they attract mosquitoes.

Dancbmac
Not something I would wish on anyone. I caught dengue fever in 2018 in the Philippines and ended up in rural hospital for 3 days. There are no medications to treat dengue and all…