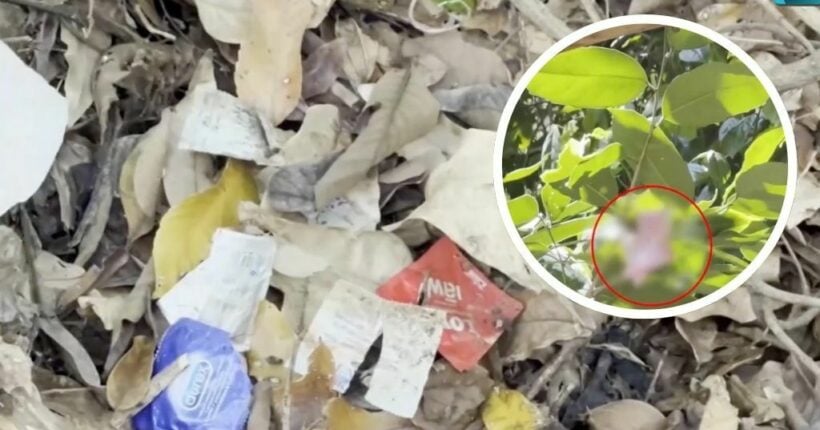 The screenshot shows used condoms were on the floor and tree branches.

Residents exercising at Pattaya’s Khao Phra Tamnak Public Park today are demanding authorities put stricter measures and patrols after they found many used condoms and rubbish left there. The residents said that many Thais and foreigners visited the park, and the state of the park “spoiled Pattaya’s reputation”.

Yesterday, a man who visited the park to exercise complained through Thai social media. He said he spotted a used condom on the walkway while jogging and tried to find where it may have come from. He suddenly spotted another used condom hanging on a tree branch. The man posted that there were more used condoms in the same are and plenty of garbage was strewn around nearby as the area was a ‘blind spot’ with no electric or security lighting.

The man said many people had reported this problem to the police before, and the problem appeared to have disappeared for almost a year. But now it had come back again, “so the relevant departments should immediately take care of it”. He told Thai media that the rubbish might have come from groups of teenagers gathering in the public park at night.

Pinetree
18 hours ago, JustAnotherExpat said: 555555!! What, exactly, do they expect the authorities to do other than stifle their laughter? Provide appropriate bins, also for dog poo bags, something this lot have still to realise. Its not rocket science is…