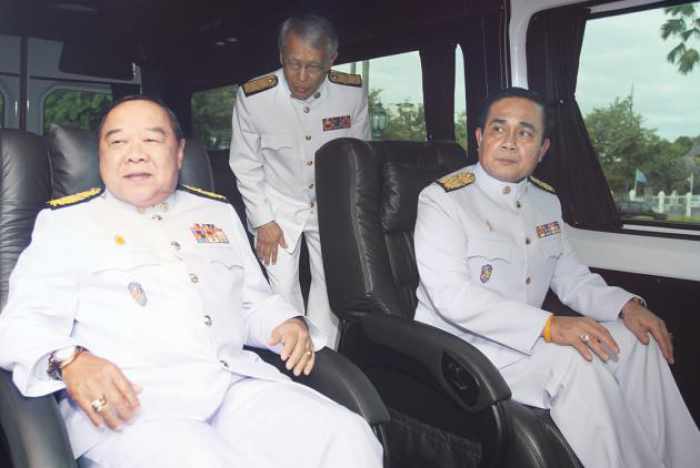 PHUKET: Prime Minister General Prayuth Chan-ocha yesterday gave his assurance that members of the National Reform Council (NRC) would be selected fairly and carefully, with none of the candidates being especially favoured because of their connections.

He called on all sides to take part in the reforms to help tackle the country’s major problems.

“Everyone must take part in solving the country’s problems – the government, the people, the private sector and civil society. No particular people should do it alone,” Prayuth said, in his capacity as chief of the National Council for Peace and Order (NCPO).

He was speaking to a gathering of members of the NRC selection committees at the Army Club.

Prayuth’s assurance was backed by some key members of the selection panels. Meechai Ruchuphan, chairman of the selection committee on public administration, insisted that no particular candidates have been favoured in advance by the panel to become NRC members.

Meechai said one rule had been agreed upon by the selection committee members – they would abstain when their relatives happened to be among the candidates to be voted on by panel members.

“This is to ensure transparency. And we will take into account the diversity of the NRC members; they will come from different sectors and groups of people, and they will be well qualified and experienced,” he said.

Former Thammasat University rector Surapon Nitikraipot, who is spokesman for the selection committee on political affairs, said the panel members had agreed to focus on picking as many people as possible who were involved in the political conflict.

In response to concerns that the selection panels may have already favoured certain candidates in advance, Surapon said he believed in the integrity of the selection committee members.

The 11 selection committees met separately after Prayuth’s speech yesterday to choose the presidents of their panels and to discuss the selection rules in detail.

A total of 7,042 people named as candidates for the NRC during the nomination period between August 14 and Tuesday, according to Election Commission secretary-general Puchong Nutrawong. Of these, 4,262 people were nominated by not-for-profit legal entities and 2,780 by the provincial selection panels.

The EC was assigned by the NCPO to oversee the NRC nomination process.

Puchong said the final number of nominations would be concluded today when nominations through mail (posted by the deadline on Tuesday) are also included.

Prayuth, who is also the Army commander-in-chief, yesterday told the members of the NRC selection committees that he regarded the high number of nominations as a “success for us all”.

“It’s good news to have so many nominations. I would like to thank all the parties involved,” he said.

However, Prayuth also said the selection committees would face much pressure in choosing 250 people for the NRC from the several thousands of nominations. “There will be a lot of attention and pressure,” he added.

He urged the selection committees to ensure fairness and transparency. He said the selected NRC members must show their determination and devotion in order to ensure success of the reform efforts.

The PM and NCPO chief also showed his lighter side during his speech yesterday.

Prayuth, wearing a military uniform to the event, said he was advised against wearing a uniform to appear there. “But I don’t know what to do. I have not retired yet and I am still working in the NCPO,” he said.

He also light-heartedly accused some media of “being too imaginative” that his military clique already had their favoured candidates pre-selected for the NRC.

Prayuth said some people had told him that he had become the target of a black-magic attack, so he was advised to get holy water sprinkled by Buddhist monks. “I got so much holy water that I almost fell ill,” he added.