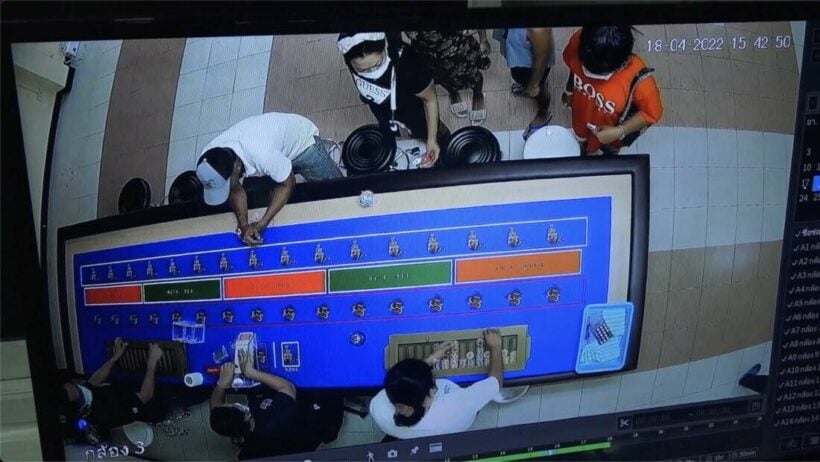 Officers from Bor Put police station in Koh Samui raided an illegal “casino” located in the middle of the island yesterday evening. They were joined by the island’s mayor, Chayapon Intarasupa. Those running the operation allegedly allowed people to gamble in different games to win money, according to reports.

Thai media reported that the illegal gambling centre was a one-story building with blacked-out windows and many CCTV cameras. Local residents were seen going in and out of the building at all times. It was located just 200 metres away from the nearest police station.

Yesterday, officers posed as customers to enter the building, where they found a group of locals gambling inside. After obtaining clear evidence that illegal gambling was taking place, the undercover officers informed other officers standing by outside to raid the building and arrest the group inside at around 6pm on Monday.

Police arrested a total of 16 suspects at the scene and confiscated 46 pieces of evidence, including 45,200 baht in cash, as well as dice, poker cards, gaming chips, CCTV cameras, computers, televisions and other gambling equipment.

The suspects reportedly confessed their crimes during police questioning. They were charged for allegedly hosting gambling without permission and breaking Covid-19 restrictions to gather in a group. Some suspects were arrested for entering and staying in Thailand without permission.

In Thailand, gambling is illegal and casinos are not allowed, though legislators are working to revise the law to permit casinos to operate in the country. Meanwhile, those who would like to place a bet legally may choose a lucky number and buy a government regulated lottery ticket.