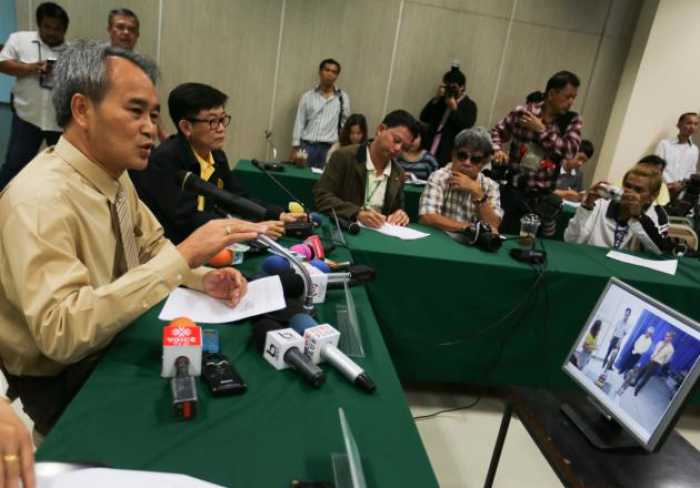 PHUKET: Some of the 50 artifacts worth more than 50 million baht found in the treasure trove seized by officers raiding the homes of disgraced former crime-buster Lt Gen Pongpat Chayaphan will be repatriated to their countries of origin, Fine Arts Department director-general Bowornwej Rungrujee said yesterday.

The 50 items, dating back to Khmer, Lao, Burmese, Ayutthaya and Rattanakosin kingdoms, will be returned to their sites of origin, while an investigation is underway to find out how the former Central Investigation Bureau (CIB) chief Gen Pongpat acquired them.

“These items cannot be possessed or owned without proof of import,” Borwornwej said.

Of the items, 13 come under the department’s Category 1, comprised of deities and Buddha images built in Khmer style; while the remaining 37 come under Category 2, or Buddha images or Hindu deities built in different kingdoms at different times, he said. The artefacts are made from sandstone, wood or metal depending on where and when they were built.

Another 100 items have been inspected and found to be imitations, though there are still more than 10,000 items awaiting identification and authentication, Bowornwej said.

He estimated that the 50 items proved to be authentic, so far, should be worth about 50mn baht in total.

The Fine Arts Department will later coordinate with rightful owners and repatriate them accordingly.

“The items that belong to Thailand will be put on display at the National Museum once the case [surrounding Gen Pongpat and his network] has been completed,” he said.

The haul also included a large number of furniture pieces inlaid with mother-of-pearl and other household items and decorations dating back to the reign of King Rama IV (1851-1868). Bowornwej said these times could be privately owned.

The photographs of all seized items will soon be posted on the department’s website, www.finearts.go.th, for the public to view. People can also see if they own any of the items.

Nopporn allegedly hired men through Gen Pongpat to force a business associate to reduce his loan from 120mn baht to 20mn baht.

Thai police were working with their counterparts in neighboring countries and Interpol to seek an international warrant for him, he said.

Gen Prawut said he could not yet say who was protecting Sahachai, but said the police had got reliable information about his whereabouts. He also ruled out links between Sahachai’s illicit business and the insurgency in the Deep South.

Gen Pongpat, the former CIB chief, is undergoing treatment for diabetes and high-blood pressure at a prison hospital near the Bangkok Remand Prison where he is being detained. Former deputy CIB chief Kowit Wongrungroj underwent a medical examination along with Gen Pongpat yesterday.