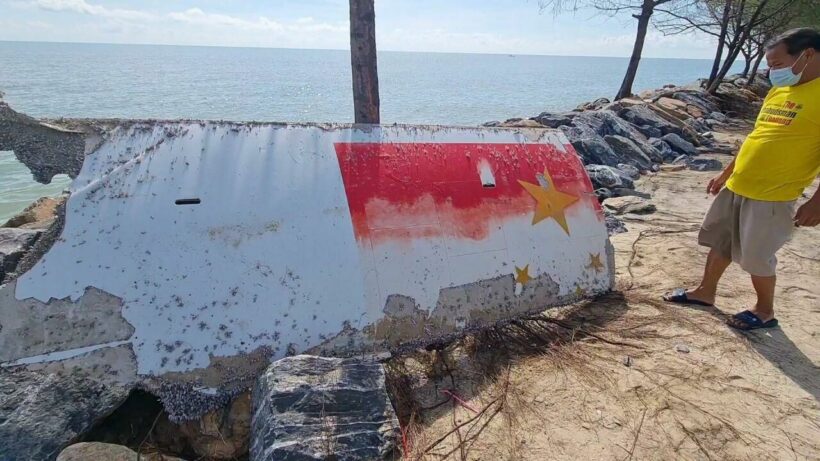 What appears to be part of an aircraft, has washed up on a beach in Nakhon Si Thammarat province yesterday. A faded Chinese flag can be seen on the 1.2 x 3 metre sheet of aluminium, suggesting it could be part of one of China’s Long March Rockets used to send satellites into space.

The sheet of metal washed up onto a beach in Pak Phanang District, the same district where a corpse tied up with rope was found floating on the surface of the water earlier this week.

Pieces of suspected aircraft have also washed up in Pak Phanang district once in 2015 and again in early 2022, but did not have any distinguishable features to help in identifying where they came from.

This time, the visible Chinese flag suggests the sheet of metal and composite materials may not be from a passenger plane as expected but is more likely to be part of the covering of a Chinese Long March rocket, a family of disposable launch system rockets operated by the China National Space Administration. The internal surface of the metal contains no letters or serial number.

Tears and wrinkles in the metal indicate it has been involved in some kind of explosion. The barnacles stuck to the surface also suggest it has been floating in the sea for around ten years.

The piece of wreckage was discovered by staff from Laem Tulumpuk Subdistrict Organisation. President of the organisation, Prayut Thanwattana, said the metal has been taken to his house to await inspection by experts.

Related Posts  Tower Of Babble - Have your say on The Thaiger, January 18 | VIDEO