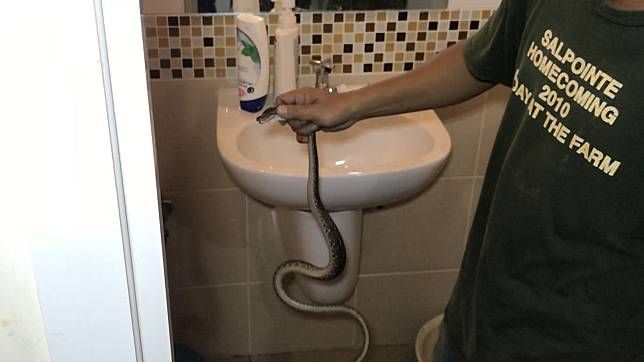 Phuket authorities are saying that large snakes found in homes will now be taken off the island after residents voiced fears of the snakes re-entering their living quarters. Pongchart Chouehorm, Director of the Khao Phra Thaew Natural and Wildlife Education Centre in Thalang says that the large snakes, including king cobras, will be handed over to a wildlife reserve in Phang Nga.

“I admit that a lot of snakes have intruded into and disturbed local homes.We have found a lot of snakes in homes recently because it is their mating season. Additionally, it is dry and we are entering the hot season, they need water to drink.”

Pongchart says that every wild animal in Phuket falls into 2 different groups: those living in protected natural reserves and those that have been found in the wilderness.

“Nowadays, there are many animals getting lost in areas of Phuket. Some of them are also injured. If we find injured animals like lorises or monkeys, we always take them to receive medical treatment by veterinarians. After that, we release them to the place where we found them.”

“After receiving medical treatment, the released animals do not have problems finding food by themselves, as they grew up in the forest and know how to survive, unlike animals that have been raised as pets.”

“We have now partnered with the Phang Nga Wildlife Nursery Station and the Klong Saeng Wildlife Research Station in Surat Thani in order to manage and solve the problem with snakes together.”

“From July to September last year, we found 109 pythons and took them all to the Phang Nga Wildlife Nursery Station because of their aggressiveness. We also take cobras and king cobras to Phang Nga, as the nursery station is mainly responsible for taking care of lost animals.”

Pongchart says that residents should keep both the inside and outside of their homes clean to detract snakes from entering in or around the premises.