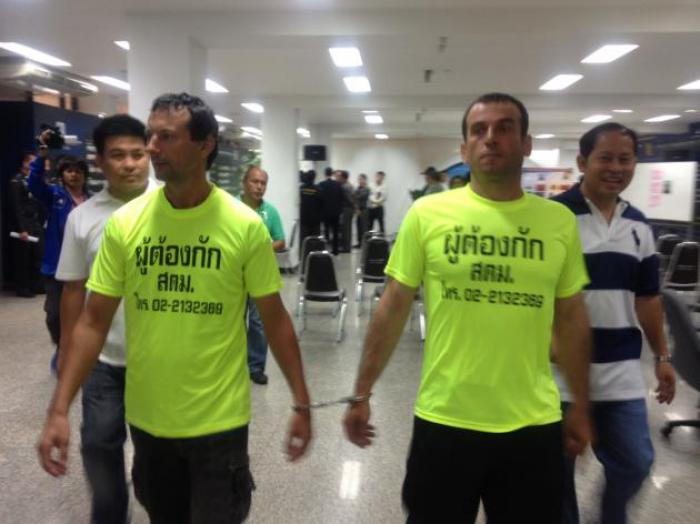 PHUKET: Nakhon Si Thammarat police announced yesterday that they had seized 177 guns, 1,440 bullets and two M26 grenades from 179 suspects in raids and checkpoints from February 17-28.
A self-proclaimed anti-government protest guard, Issararat Khumpairan, 36, who was arrested in Nakhon Si Thammarat’s Thung Song district on February 17, claimed that he got a shotgun, two bullets and one M26 grenade from Bangkok.

Another case involved Chatree Naksripong, 36, who allegedly worked as a debt collector for a drug ring that was led by a prisoner from behind the bars at Nakhon Si Thammarat Prison. The suspect, who had previously served seven years for attempted murder, was nabbed with an M3 machine-gun loaded with 57 bullets.

PHUKET: Farmers who hold pledging receipts issued under the government’s rice-pledging scheme last November are expected to be paid next week, in a breakthrough that could ease one of the Yingluck Shinawatra-led government’s most serious political problems, at least in the short term.

The Election Commission’s board yesterday approved a request by the caretaker government to use an additional Bt20 billion from the national budget to pay the farmers, who are still waiting for payments that were due in November.

The government must return the funds to the budget by May 31.

Caretaker Finance Minister Kittiratt Na-Ranong yesterday clarified to the EC the reasons the government needs the Bt20 billion for the rice-pledging scheme.

After the meeting with Kittiratt, EC member Somchai Srisuthiyakorn posted on his Facebook page that the funds would be considered an advance payment, which would be repaid in full by the Foreign Trade Department to the Finance Ministry by May 31.

The funds to cover the repayment would come from the department’s sale of rice from the state’s stockpile.

In his Facebook post, Somchai said the EC approved the use of central-budget funds for six reasons.

First, the EC has the power to approve the additional budget, which was requested as an urgent case.

Second, Somchai said, the Bt20 billion is considered borrowing – not expenditure – and the government will have to return all of it after earning money from the sale of rice.

Third, the Public Debt Management Office has assured the EC that the amount will be returned in May, and that the use of the funds will not affect the nation’s reserves set aside for emergency cases.

Fourth, the Foreign Trade Department assured the EC that it could earn Bt8 billion a month from rice sales, totalling Bt24 billion over three months.

Fifth, the due date for the return of the funds, May 31, is expected to be within the time frame of the current caretaker government, so the move is unlikely to place any obligations on the next government.

Sixth, the Bt20 billion will be paid to farmers who received pledging receipts in November, before the dissolution of the House of Representatives. Therefore, the payment to the farmers cannot be seen as a move to gain an advantage in the ongoing election.

Somsak Chotrattanasiri, budget director of the Budget Bureau, said yesterday that the Bt20 billion should reach farmers next week via the Bank for Agriculture and Agricultural Cooperatives.

“Using Bt20 billion as an advance payment should not create any problems, as there is still almost Bt70 billion left in the nation’s central budget,” he said.

Meanwhile, the Foreign Trade Department reported that caretaker Commerce Minister Niwatthumrong Boonsongpaisan had approved the sale of 600,000 tonnes of rice in separate auctions to 11 private companies who took part in bidding, earning a total of Bt20 billion.

Caretaker Deputy Commerce Minister Yanyong Phuangrach said the money from the central budget should reach the farmers over the next week. When combined with money earned from rice sales – which he said should amount to Bt10 billion a month – there should be sufficient funds to pay farmers waiting for payments from December as well.

PHUKET: The five Election Commission members have jointly petitioned the Constitutional Court to rule on the problems related to the 28 constituencies where there is no MP candidate, EC secretary-general Puchong Nutrawong said Tuesday.

The three questions the EC asked the Constitutional Court to rule on included whether the commission could go ahead and announce the opening of candidacy registration, and designate a new election date in the 28 constituencies.

The second question was that if the EC has no mandate to issue such announcements, whether it would need issuance of a royal decree to amend the previous decree for dissolution of the House of Representatives, which is the mandate and responsibility of the prime minister.

The third question was whether, in case a new royal decree needs to be issued, the election decree for the 28 constituencies in particular is allowed, or whether the royal decree must only designate new elections nationwide, as the Constitution requires an election to be on the same day nationwide, Puchong said.

He said the EC would respect the Constitutional Court’s ruling on these questions.

PHUKET: Eleven Thais are on Forbes’ 2014 billionaires list, led by Charoen Pokphand Group’s Dhanin Chearavanont.
Ranked 97th among 1,645 people around the globe whose net worth this month exceeds US$1 billion, Dhanin is the richest Thai with net worth of $11.4 billion (Bt370 billion). Last year, he was ranked 58th with net worth of $14.3 billion – which was the highest level since 2009 when he first joined the ranking.

Also on the list are Charoen Sirivadhanabhakdi, Vanich Chaiyawan, Krit Ratanarak, Prasert Prasarttong-Osoth and Keeree Kanjanapas. The magazine also put Thaksin Shinawatra and family on the list, with net worth of $1.6 billion. It said that “ousted in a 2006 coup, Thaksin managed to recover close to $1 billion of his $2.3 billion in frozen assets”.

The rest are Vichai Srivaddhanaprabha, Surin Upatkoon and Thongma Vijitpongpun. Aloke Lohia, chief of Indorama Ventures, was the last on the list with net worth of $1.1 billion.

Globally, Bill Gates is back on top after a four-year hiatus, reclaiming the title of world’s richest person from telecom mogul Carlos Slim Helu of Mexico. Gates saw his fortune rise by $9 billion in the past year to $76 billion.

Forbes found 1,645 billionaires with an aggregate net worth of $6.4 trillion, up from $5.4 trillion a year ago. Among them, 268 were new 10-figure fortunes, including 42 new female billionaires, another record. In total, there are 172