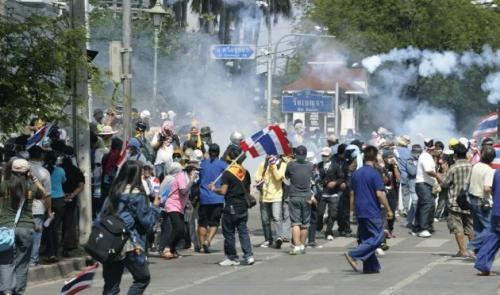 At least two of the victims died of gunshot wounds.

The injured were being treated at 10 hospitals in Bangkok. Two of the fatalities died at Ramkhamhaeng Hospital, where another six people were being treated for their injuries. Fifteen injured were sent to Dr Panya General; four to Petcharavej Hospital; one to Chularat 9; 12 to Rajavithi; seven to Vibharam; eight to Ramathibodi; two to Camillian; one to Nopparat Rajathanee, and another to Paolo Memorial Chokchai Hospital.

Medical staff at Ramkhamhaeng Hospital reported that a total of eight people had sought emergency treatment there. The two shot dead were a 21-year-old Ramkhamhaeng University student, Taweesak Phokaew, and a 26-year-old red-shirt supporter, Witsanu Phaophu.

Taweesak was shot in the shoulder and through the left lung and admitted to hospital at 9pm on Saturday. Witsanu was shot at the middle of his chest and died en route to the hospital in the early morning.

“We cannot give any details of patients to the public because we respect the patients’ rights,” medical staff told The Nation.

It is also disclosed that Thanasit Wiangkham, 22, sustained critical injuries.

Ramkhamhaeng hospital reported that among the eight patients it received, four were Ramkhamhaeng University students. Of this number, one was discharged and another transferred to another hospital. As of yesterday morning, only one case remained at the hospital.

Dr Panya General Hospital reported that of the 15 people sent there to undergo treatment, only six cases had been discharged by yesterday morning. Three had been shot – Atthaphon Hombhupha, 19, in the left side of his front leg; 30-year-old foreigner Bun Ratana in his back; and Sorasak Musikaew, 22, was shot in his right foot. Tanaphong Kongkriangkai, 21, was injured by shrapnel but has now been allowed to go home, according to the hospital’s report.

In a related development, as of 6pm yesterday, the Erawan Health Emergency Centre said at least 46 people were sent to hospitals and treated for tear-gas inhalation. Tear gas was fired almost throughout the confrontations between police and anti-government demonstrators at various locations.

How the clashes unfolded

Police used tear gas and water treated with a chemical additive yesterday after protesters tried to remove barriers and push back against a police line near Government House and the Metropolitan Police Bureau.

11.25am: Protesters at Chamai Maruchet Bridge try to push the line again, remove some concrete barriers. Police use tear gas on protesters.

1.35pm: Protesters at First Infantry Division intersection try to break the barriers during a war of words. Police use chemically treated water.

3.25pm: Government’s Centre for the Administration of Peace and Order (CAPO) announces reclaiming of areas at Government Complex and Finance Ministry.

6pm: Police and protesters at Chamai Maruchet Bridge and First Infantry Division continue to fight; heavy use of tear gas by police.

Casualties from incidents in Ramkhamhaeng area

Drama at Ramkhamhaeng University, as it happened
The Nation / Phuket Gazette
PHUKET: Saturday November 30 8pm: Protesters at Ramkhamhaeng University close the university’s rear gates where police were positioned for security purposes. Two gunshots are heard and a Cambodian construction worker, Bun Rattana, 29, is hit by a “stray” bullet. Protesters stream out of the university grounds en mass, leading to a confrontation with police.

9pm: More than 300 red-shirt protesters in Rajamangala Stadium clash with anti-government protesters at the university. 300 anti-riot police are called in to keep the two sides apart.

10.22pm: Government-runs twitter @ThaiKhuFah and posts: “The Centre for the Administration of Peace and Order (CAPO) wishes to clarify that police were not responsible for the shooting at Ramkhamhaeng University. Police investigations have discovered the shooting was related to a local brawl. Police patrolling the area are unarmed.’

11pm: Pol Maj Gen Anucha Romayanant, deputy spokesman for CAPO, announces that one man was killed and five others were injured in the shooting. Throughout the night and during the morning, explosions are heard around the university.

8.20am: Ramkhamhaeng University Rector Assoc Prof Wuthisak Lapcharoensap says that at around 6am, students were woken by the sound of shooting and explosions. A number of students were seriously injured, but he was unable to confirm the number. Wuthisak says 2,000 students are stranded and should be evacuated as soon as possible.

10.20am: CAPO deputy director Pol Gen Worapong Chiewpreecha says police cannot access the university because the situation is not under control. He says police are trying to arrange BMA buses to get protesters out of the university.

10.30am: Pheu Thai spokesman Prompong Nopparit claims the shootings are the work of an ill-intentioned third party wanting to stir up trouble.

12.00am: Erawan centre reports two dead and 45 injured in the shooting attack on the university.

1pm: Ramkhamhaeng University announces that it will close temporarily until December 3 and suspends all classes, exams and other activities.

2.20pm: Gen Songwit Nunpakdee leads a company of soldiers from the 11th Infantry Regiment King’s Guard to take control of the university area.

2.45pm: Students and protesters are moved out of the campus in eight university buses to a shelter at a Rama 9 temple, before being sent home.

3.50pm: A bus is set on fire in front of Ramkhamhaeng University