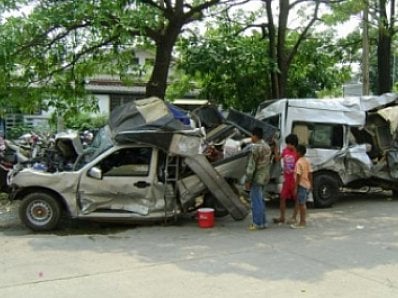 PHUKET: In a black day on Thai roads yesterday, 10 people died and 52 were hurt, many seriously, in just two multi-car pile-ups.

The first accident involved 18 cars on Mittaparb Road in Saraburi province and killed three people and injured some 20 others. A second accident in Ayutthaya killed seven and injured 12 others.

The Mittaparb Road accident took place in front of the TPI cement factory on the inbound road in Kaeng Khoi district at about 1:30am.

According to police, the trailer of a speeding truck came loose from its coupling, causing it to disconnect. The cars following were unable to stop and slammed into the trailer.

A total of 18 vehicles – including pickups and minivans – were involved. Three people were killed instantly – two van passengers, Patchanee Pimhinkong, 13, Chai Phaengcharee, 56, and an unnamed woman in a pickup truck – while some 20 injured were sent to Kaeng Khoi and Saraburi Hospitals.

Police had to seal off the road to make possible the transfer of the dead and injured.

Meanwhile, seven people were killed and 12 others injured when a pickup truck carrying illegal Burmese migrant workers veered off the road and plunged into a roadside irrigation canal in Ayutthaya’s Ban Phraek district, according to local police.

The accident left five women and two men dead, including the driver, Suwicharn Boonmen from Sukhothai, as well as injuring 12 other migrant workers sitting in the open back of the vehicle, Ban Phraek police said.

Most of the victims were identified as Burmese migrant workers.

Preliminary investigations have revealed that the vehicle was bringing the workers from Mae Sot, in the Thai-Burmese border province of Tak, and was heading for the central province of Lop Buri via the Asian Highway.

As he approached Ang Thong province, the driver saw a police checkpoint and tried to avoid a search, speeding away and using a Ban Phraek district road as a shortcut.

Police said the driver might not have been familiar with the narrow road. He lost control and veered into the canal.

PHUKET: Starting on Sunday, speeding passenger vans will be fined Bt5,000, and for a repeat offence will lose their public-transport licence.

Somchai Siriwattanachoke, director-general of the Land Transport Department, said yesterday that so far some 9,000 RFID (radio-frequency identification) tags have been installed in commuter vans to detect speeding on tollways.

Drivers found traveling over 90km/h will be fined Bt5,000 for the first offence, he told a press conference held by the department, Transport Co and Bangkok Mass Transit Authority.

For a second offence, they will be fined Bt10,000 and the public-transport licence will be revoked.

Anyone spotting vans that are driven too fast or in a reckless manner can report them to the 1584 hotline around the clock, Somchai said.

PHUKET: From evidence gathered at the Pattanakarn Road crash site, police believe the driver of an LPG tanker truck was dozing behind the wheel when his vehicle slammed into a bridge railing in Klong Tan district and exploded last week.

“Today our officers collected evidence from the burnt out vehicle and at the crash site. We have found no traces of braking on the road, leading us to assume the driver was dozing at the wheel,” Pol Lt General Peerapong Damapong, commissioner of the Office of Forensic Science said yesterday.

The driver, Anan Kaewma, fled the scene after the accident. Police urged him to surrender or face an arrest warrant.

The truck, carrying 4,000 litres of LPG, slammed into the bridge railing in front of Pattanakarn Soi 20 on Friday at about 5.30am and exploded. The blast seriously burnt a man and wounded two others.

Police sealed off traffic and allowed the fire to burn off the LPG as they could not close the valve. Traffic resumed around 1pm.

Pol Lt Col Krissada Kansoda of Klongtan said police had planned to talk to accident victim Buapan Suwannasaen, today but doctors at Phetcharavej Hospital had refused permission as he is still in a sterile room. Doctors believe he will be well enough to talk to police in a few days.

Krissada added that if the driver fails to show up within a few days, the police will seek court approval to issue an arrest warrant against him.