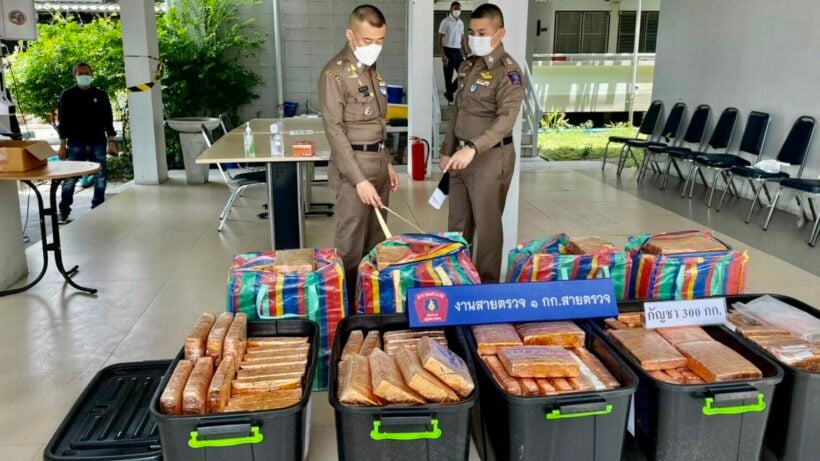 40 year old “Phitak”, a taxi driver that also allegedly drops off drugs to dealers who are further down the drug selling hierarchy. Reportedly, he made deliveries to parking lots in the Lad Phrao area of Bangkok. Police also arrested 35 year old “Phermphol”. Both were arrested at the PTT petrol station in Sampran, Nakhon Pathom.

Samran Nuanma, the deputy commissioner of the Royal Thai Police, says Phitak was given 75,000 baht per job but his alleged accomplice was only given 20,000 baht to further move the drugs.

Thai media reports that both individuals had previously been released from prison for drug smuggling.

The marijuana was reportedly found in the back of the suspect’s car in several large containers.

Both men have been charged with distributing a Category 5 drug.

HolyCowCm
That should be the least of their worries going after. They need to stop the Anutin charade of medical and just legalize it.

Bluesofa
3 hours ago, HolyCowCm said: That should be the least of their worries going after. They need to stop the Anutin charade of medical and just legalize it. Perhaps the Deputy Minister of Agriculture, Thammanat Prompao could give Anutin some…

Dedinbed
4 hours ago, Thaiger said: Both were arrested at the PTT petrol station Ganja and gasoline .. plod'll be pumping them for info then ..