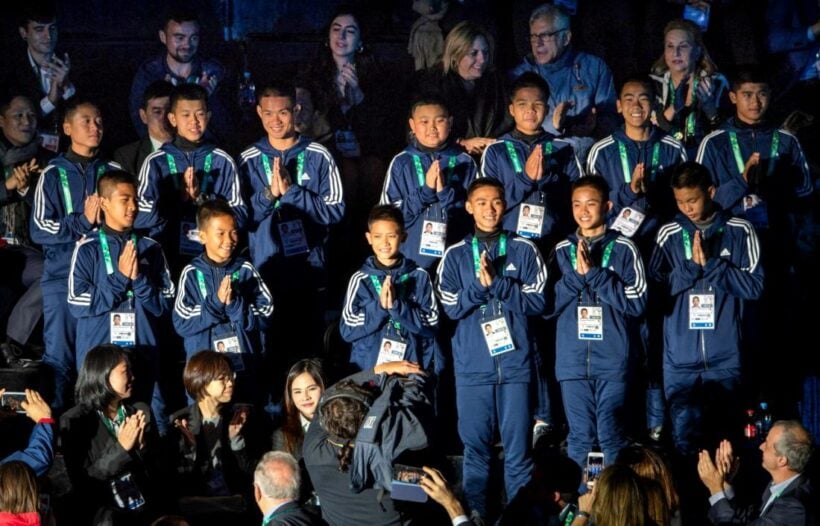 PHOTO: Mu Pa, who were rescued from Tham Luang cave in Thailand, stand during the Opening Ceremony of The Youth Olympic Games, in Buenos Aires, Argentina – EPA

“When they arrived at the Buenos Aires international airport, liaisons of international athletes waiting for their teams at the airport also greeted them warmly.”

The 13 members of the Mu Pa football academy team have been warmly welcomed at the Youth Olympic Games’ opening ceremony in Buenos Aires.

In his opening speech, International Olympic Committee’s President Thomas Bach said the group had shown determination and bravery when they were trapped in a cave for weeks.

The determination and bravery of great athletes help in all facets of life, Bach said, adding everybody will remember the brave young Thai group, members of the Mu Pa Academy team, who were trapped in a cave for 17 days.

He said the IOC had invited them to Argentina to share their experiences with other athletes.

“Welcome, Mu Pa,” Bach said, and the Mu Pa members stood up to applause from the cheering crowds and gave a “wai” to the audience.

The opening ceremony of Buenos Aires Games 2018 was the first to take place on the streets of the Argentine capital, outside a traditional stadium venue, while organisers offered free entry to the general public.

Deputy Government Spokesman Lt-General Werachon Sukondhapatipak revealed that throughout the trip from Bangkok to Buenos Aires, many foreigners had sought photo opportunities with the Mu Pa team.

When they arrived at the Buenos Aires international airport, liaisons of international athletes waiting for their teams at the airport also greeted them warmly.

Their entrapment inside the flooded Tham Luang cave in Chiang Rai province in late June grabbed worldwide attention, bringing together a band of international rescuers to join in what was initially considered mission impossible to rescue them.

The Mu Pa footballers and their deputy coach were eventually evicted from the heavily flooded cave in July with a method believed to have been used for the first time.

Werachon said the group would be awarded “Asia Game Changer Awards” by the Asia Society Association during their visit to the United States.

They will attend a “Thanking the World” activity, which would include exchange of culture and sports with local youth in Los Angeles.