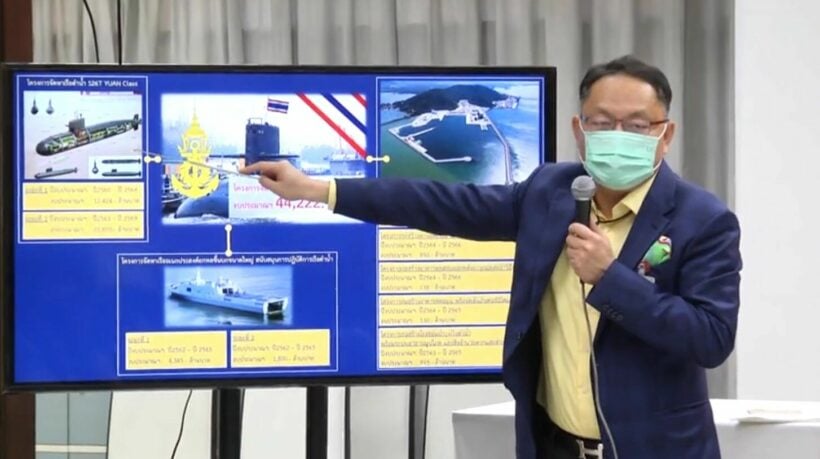 A MP from the Pheu Thai Party claims that the submarine that the government recently brought from China will be delivered without an engine after issues with a German supplier.

Yuttapong says the submarine, which is scheduled to be delivered next year, should at least be included with an engine. He also questioned the credibility of the Chinese specialists who were expected to take control of submarine pier construction because they were registered with Thailand’s Ministry of Labour as Chinese-language teachers. He added that there was no progress in the construction of the pier.

(The work for the construction of the piers would likely not be on the list of approved jobs for foreigners in Thailand, hence the rather odd designation)

“Also, there is no progress on the construction even though they have received 15 per cent of the budget.”

Earlier reports say that the German supplier would not sell a submarine engine to the Chinese firm because it would be used in a submarine that would later be sold to another country.

Stardust
1 hour ago, Faz said: The whole purchase process reeks of incompetence. Mr Yutthapong claimed China Shipbuilding & Offshore International Co (CSOC), which signed the submarine contract with the navy, does not represent the Chinese government. The CSOC is a…

Faz
35 minutes ago, Stardust said: All their warships or submarines are with German MAN tech or MTU. Chinese cannot produce by themself any sub, ship or aircrafts. Not since 2020 if you read the link.
Stardust
19 minutes ago, Faz said: Not since 2020 if you read the link. Which link? https://www.dw.com/en/german-engine-technology-found-in-chinese-warships-report/a-59740301 This one? This things are on the table and definely they cannot produce any submarine, 100 % and MTU knows exactly why but for…

Pinetree
If I recall correctly, on most subs, they can't be retrofitted without taking the pressure hull apart. If so, and if my house plumbing is anything to go by, good luck with that idea.
JamesR
10 hours ago, Alavan said: Seems you don’t understand sarcasm. You must have jokes in Germany, not? 9 😄