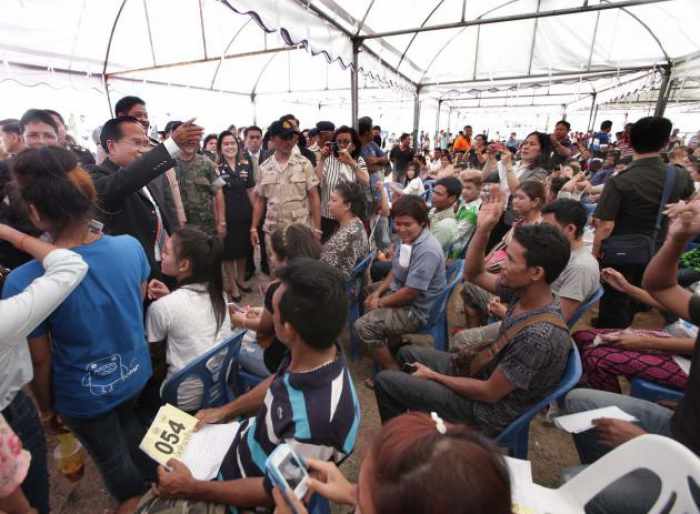 PHUKET: Officials from Thailand and Myanmar will meet next week to try to resolve problems in registering migrant workers, Lt-General Thanchaiyan Srisuwan, chief of the Supreme Command’s Directorate of Operations, said yesterday.

In a video conference with provincial governors and deputy permanent secretary for the Interior Jarin Chakkapark, Thanchaiyan, in his role as a member of the sub-panel to oversee migrant worker issues, reported that the registration of migrant workers had gone well in Ayutthaya, Rayong, Chon Buri, Chachoengsao, Surat Thani, Samut Prakan and Songkhla provinces.

Thanchaiyan also sought consistent labour database information and proposed that registration details from “one-stop service” centres’ be online so officials in all provinces can access the data, as some provinces that have set up such centres reported issues relating to forms that need to be filled in – by an overwhelming number of applicants. He said officials in Nan also wanted to open a similar centre because of the demand for Laotian workers to collect and process longan there.

These boats have also been plagued with the problem of forced labour, with heavy commission fees taken from workers and a lack of notice by trawler owners to workers about conditions when working at sea, which created stress and made them want to work on shore.

Gen Chatchawal said the National Council for Peace and Order wanted migrant workers registered by July 21, so that all were “legal” by the end of this month.

They should also provide workers with legal protection, clear employment contracts and a job description to prevent a misunderstanding and claim of being forced into such work, he said.

The use of labour middleman, or brokers, must be eradicated and the Labour Ministry would oversee the whole matter, Gen Chatchawal added.