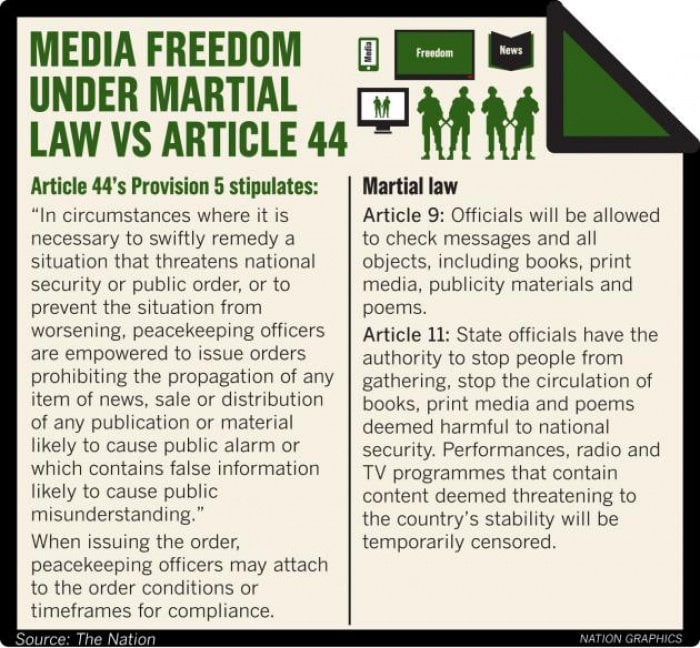 PHUKET: Four media organizations yesterday issued a joint statement asking the National Council for Peace and Order (NCPO) to shed more light on Peace and Order Maintaining (POM) officers in order to ensure that the media and the general public will not be affected by Article 44.

They say the order gives the NCPO, led by Prime Minister Gen Prayut Chan-o-cha, a lot of room for interpretation. “What seems to be problematic here is the interpretation of the word ‘security’, which is broad. It could give power users the opportunity to over-exercise their authority,” said Attasit Pankaew, a political scientist at Thammasat University.

The lack of clarity about the definition of “security” could lead to self-censorship of the media.

On Wednesday night, the government replaced martial law with Article 44, under which the conditions imposed by the NCPO seem to threaten media freedom. The interpretation of the clause, threat to “security”, which might lead the authorities to stop the media from broadcasting, has sparked huge concerns among the media.

“Order No 5 of Article 44 has clearly highlighted the possibility of censorship by state authorities,” said Pattara Khumphitak, president of the National Press Council of Thailand.

If the authorities decide to interpret something as being distorted information harmful to security, this may directly hurt the media and people’s freedom of expression at large.

Matters related to the order of the NCPO’s chief are also unclear, according to Pattara. The NCPO should be more precise about when it has to step in and exercise power.

“Some guidelines on the exercising of power under this specific clause [related to freedom of press] should be provided to officials [to avoid excessive use of power],” he said.

Nutchapokorn Nummueng, a communications officer at the I-law Freedom of Expression Documentation Center, also highlighted the importance of being more precise about the conditions under which the media could be temporarily prevented from broadcasting information.

Army chief General Udomdej Sitabutr reacted to this concern by insisting that officials would have no need to intervene in matters that do not touch upon security issues. “I would like to ask for cooperation, in particular, from media, which plays a major role in the establishment of common understanding”, he said.

WHO launches probe into allegations of domestic worker abuse