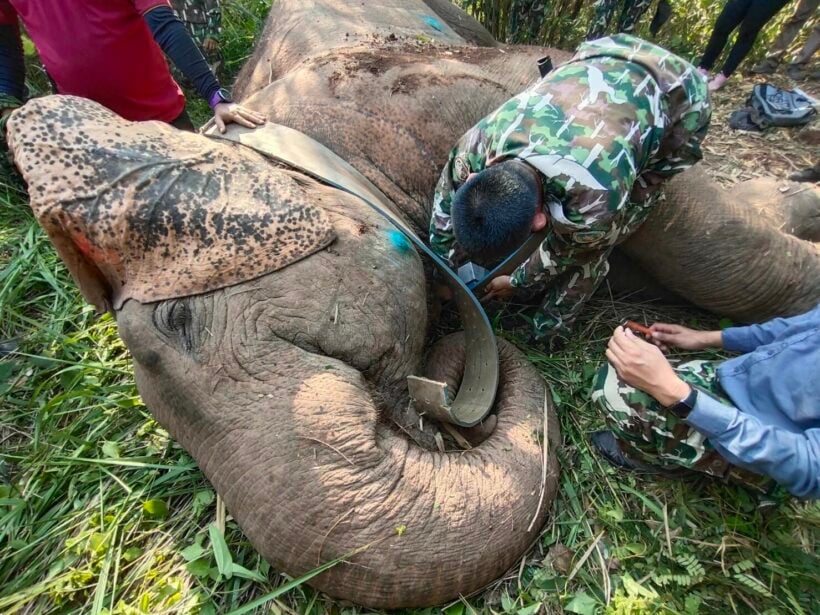 Thailand’s wildlife authorities have successfully tracked and tagged a third of the wild elephant in the Phu Luang wildlife sanctuary in the north-eastern province of Loei (near the Laos border) attaching a GPS collar which will follow the elephant’s activities after many had left their normal grazing grounds for food.

The GPS collars are being attached to 5 elephants and 3 have already been fitted, according to the director of the learning centre for wildlife conservation, of the Department of National Parks, Wildlife and Plant Conservation, Supagit Vinitpornsawan.

Each GPS collar weighs roughly 10 kilograms or less than 0.2% of an elephant’s bodyweight. He agreed that some elephants may be ‘annoyed’ once the collars were attached and will attempt to remove it, but that they eventually adapt and not even notice the GPS collars.

Elephants that leave their natural environment to hunt for food are more likely to damage crops grown by villagers near the wildlife sanctuaries or national parks.

“This will result in conflict between villagers and wild animals.”

The goal is to tag 67 elephants, but since 2018 only 11 elephants had a GPS tracker attached.

Shade_Wilder
"Each GPS collar weighs roughly 10 kilograms or less than 0.2% of an elephant’s bodyweight. He agreed that some elephants may be ‘annoyed’ once the collars were attached and will attempt to remove it, but that they eventually adapt and…

Guest1
1 hour ago, Shade_Wilder said: "Each GPS collar weighs roughly 10 kilograms or less than 0.2% of an elephant’s bodyweight. He agreed that some elephants may be ‘annoyed’ once the collars were attached and will attempt to remove it, but…
Ramanathan.P
Anything to protect the animal is a good initiative.....