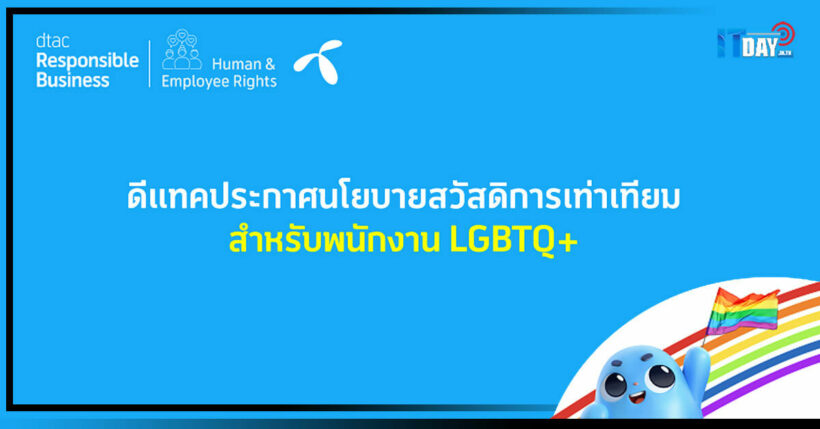 As Pride month came to a close yesterday, one large Thai corporation took a big step towards equality, extending policies to same-sex unions and offering policies helpful to the LGBTQ+ community. Mobile phone service provider DTAC, officially known as Total Access Communication PLC, has enacted a range of LGBTQ+-friendly new policies for their employees. The CEO of DTAC made clear their support of the community and gender and sexual orientation equality.

“We have zero tolerance for discrimination based on gender, sexual orientation, age, ethnicity, religion. This has long been part of our code of conduct.”

Putting the philosophy into action though, DTAC has launched policies regarding parental leave and matrimony leave, as well as groundbreaking time off for gender reassignment surgery.

The leave allotments for DTAC employees now include up to 15 days per year and 10,000 baht to cope with a death of a family member and funeral arrangements. An allowance of up to 30 days per year is afforded for LGBTQ+ DTAC staff to undergo and recuperate from gender reassignment surgical procedures. And for a family addition, DTAC is allowing up to 7 days per year of parental leave for a new baby or adoption of a child less than 1 year old.

In the case of a wedding, up to 6 days per year and a financial allowance of 5,000 baht will be granted in marriage leave, regardless of gender or orientation of the happy couple. And, while Thailand doesn’t recognize same-sex marriages or any other rights afforded to straight couples or households, DTAC proudly does support the LGBTQ+ community’s rights and benefits. They announced that all benefits legally married couples are afforded will be expanded to include same-sex couples that can show they share a relationship and household.

Thailand actually passed the Civil Partnership Bill when it was considered by the cabinet a year ago in July 2020, but it hasn’t been fully enacted. The government called for a review of the bill’s content and asked its sponsors if the legislation was even necessary. The law would allow same-sex couples to register their marriages as partners, not fully spouses, but it would provide some legal recognition for the first time.

The LGBTQ+ community in Thailand have expressed happiness and appreciation for DTAC for taking concrete action, going beyond the passive rainbow flag show of support many businesses trot out every Pride month. The more toward equality by one corporation could be a stepping stone in the turn of public sentiment to more widespread support and acceptance, perhaps even one day from the government.

JamesE
That's it. I'm turning in my dtac SIM. Any company that aspires to treat human beings as.... well, human beings is not going to get any of my business.
Billy
Good on you DTAC, well done.  AIS ???
Stonker
14 hours ago, Thaiger said: Thailand actually passed the Civil Partnership Bill when it was considered by the cabinet a year ago in July 2020, but it hasn’t been fully enacted. Sorry, Thaiger, but that's badly wrong and needs correcting.…