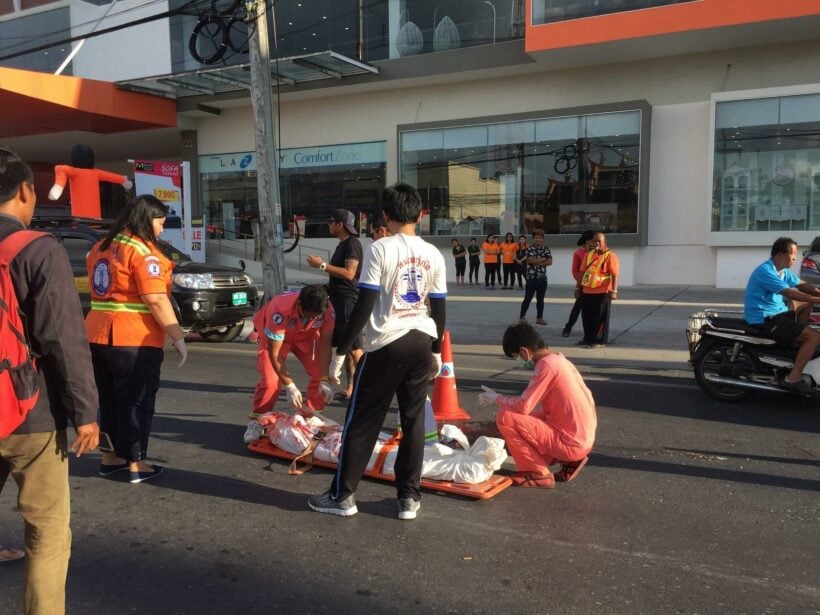 Yesterday we had to report the sad news of 12 year old Chinnarat Kajatroka who fell off the motorbike he was driving whilst his 12 year old passenger had to watch in horror as his friend’s head was crushed by a tour bus which was following behind. On his own admission the two were travelling very fast, apparently racing another motorbike that had three other school friends on it.

None of them were wearing bike helmets.

12 years old, travelling at high speed on a busy road, no bike helmets, no motorbike licence – a recipe for disaster and a cautionary tale. As is often the case, we didn’t share some of the photos sent to us with the story. The boy’s head had been crushed and his brains were splattered all over the road. While many of these graphic photos are still acceptable with some Thai media we opt for the western sensibility and not share these challenging images.

We rarely report motorbike accidents at The Thaiger as there are so many of them around Phuket and Thailand. But this one hit home with our staff, some of them parents, aware that the boy’s family and friends will have to grieve their loss and go through the process of burying their son, brother and friend.

Statistically, if you wear a helmet, drive carefully and under the speed limit, are not driving carelessly, don’t drink and drive or are not a male between the ages of 17-24, you are no more likely to have an accident than the average in any other country. Our problem in Thailand is that there are so many people caught up in a culture where you don’t wear a helmet, where drunk driving is acceptable and speeding is second nature. So few Thais have real motorcycle licences and any training for motorbike skills is really only learned on the road. Underage drivers, driving with three or more on a motorbike, driving without helmets, drunk driving – all just part of life in Thailand.

Maybe, being Buddhists, we don’t fear death as much as other cultures. We believe our souls will be re-incarnated. Maybe we need more fear to start to change our habits. Many Thais now recognise we have a national crisis on our hands with the country registering the highest road toll in the world, mostly motorbike drivers and passengers. Mostly accidents involving drink driving or speed. I have been to two funerals for people I know dying in motorbike accidents already this year.

I would like to see our police and politicians taking a more serious role in promoting better driving habits and spending money on campaigns to promote better habits on the roads and to enforce, severely, drunk and speeding drivers on our roads. It’s worked in other countries. Why not Thailand?

We send the deepest condolences to the family of 12 year old Chinnarat Kajatroka whose death was avoidable and unnecessary.

HERE is the original report.

Access to Maya Bay, from the front, permanently closed

No more beatings, and turn off your cameras – Royal Thai Army