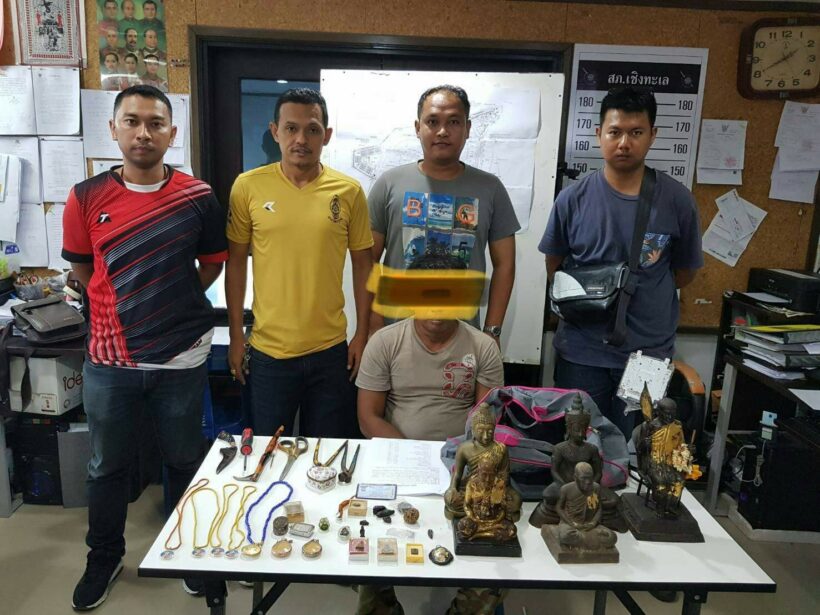 A team of the Cherng Talay Police led by Maj Parinya Kwankaew have arrested 47 year old Jiradet Kongkaew from Pattalung at a house in Srisoonthorn yesterday.

Police seized 29 famous amulets including ‘Luang Por Chaem’. He was taken to the Cherng Talay Police Station where he was charged with theft.

(An amulet is an object that is typically worn, that some people believe has magical or miraculous powers to protect its holder or bring them good fortune.)

The arrest comes after police were notified that two thieves had broken into the house of 46 year old Somchai Chaosuan. When police arrived at the house Jiradet had already been caught and detained by Mr Somchai.

Mr Somchai told police there were two thieves. He stopped Jiradet while they were trying to speed away on a motorbike. He was able to apprehend Jiradet but the other thief escaped. But Mr Somchai says he can remember the other thief’s face.

Jiradet has admitted to police that he and another man name ‘Nueng’ broke into the house and stole amulets.

Police are now searching for the other thief for questioning about the incident.

Woman rescued from lagoon in Srisoonthorn

Samui Regatta kicks off May 26